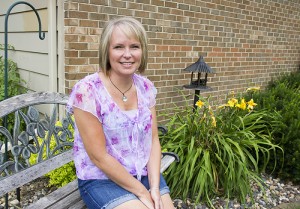 Kiki Christensen of Albert Lea, a breast cancer survivor, is one of two survivors to share stories at the Freeborn County Relay for Life tonight.

At the age of 37, she found a lump on her breastbone.

At first, doctors didn’t think much of it, but after further testing, they discovered the lump was cancerous. She went through a double mastectomy, four rounds of chemotherapy and is now cancer-free. 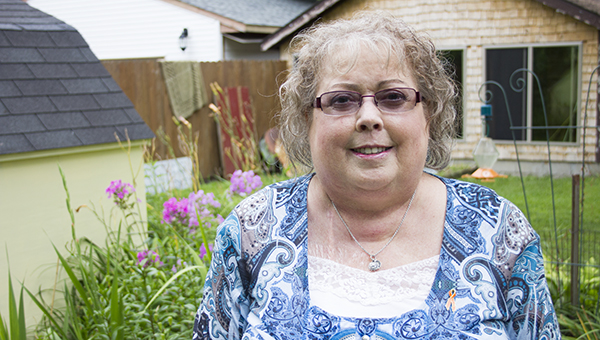 Mary Mueller of Clarks Grove is one of two honored survivors at this year’s Freeborn County Relay for Life. –Sarah Stultz/Albert Lea Tribune

Events kick off at 6 p.m. with opening ceremonies near the Grandstand and will continue until 6 a.m. Saturday.

Organizers are hoping to raise $193,000 in what is the American Cancer Society’s signature local event. The event aims to draw survivors and the community together to raise awareness about cancer and support for research. Money raised goes to support cancer research, clinical trials, a call center for cancer patients, a visitation program for breast cancer patients and free lodging for patients undergoing treatment at Mayo Clinic in Rochester, among others.

Christensen. “We want to make sure we’re doing everything we can to help raise funds for our community.”

Christensen, now 44, is married with four children. She has lived in Albert Lea since she was 12.

She said she was honored to be selected as one of the honored cancer survivors in this year’s Relay, though she is nervous to be in front of a large crowd. Her 14-year-old daughter will read her message aloud to the participants.

Christensen said her grandmother also had breast cancer close to the same point in her life, but she ultimately died.

She said finding out she had cancer was like history repeating itself with her grandmother.

Mueller, now 59, said she first noticing problems in her life in 2009.

She noticed some bruising, but didn’t think much of it and attributed it to her age.

In the spring of 2010, her husband noticed more bruising on her and asked her to call a doctor and have it checked out.

By the time she got home that day, she received a phone call saying her blood counts were abnormal and doctors wanted to send her to the Mayo Clinic in Rochester for further testing.

She was diagnosed with myelodysplastic syndrome, also known as pre-leukemia. Leukemia is cancer of the blood.

She has since gone through three rounds of chemotherapy and has had a stem cell transplant. Her donor was one of her younger sisters.

Though she has experienced other problems since, including bouts of graft versus host disease — where the new donor cells attack the transplant recipient’s body — her life has been much improved.

She said she was excited and humbled to be able to have the chance to tell her story at this year’s Relay for Life.