After 70 years, Pacelli grad gets his high school diploma

The one-time volunteer fire chief was an air mechanic during World War II, once saved a man by hauling him out of a burning building, spent several years working for a wholesale jeweler and practically ran an oil refinery as one of three chief operators. 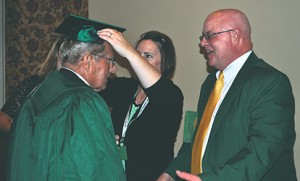 Yet the 88-year-old Austin native did it all without a high school diploma.

He technically graduated from Pacelli Catholic Schools — then called St. Augustine Catholic School — in 1946, though he was part of the class of 1944. He joined the U.S. Air Force and enrolled in its cadet training program in 1943 after his junior year in high school.

“I had a choice,” Rysavy said. “It was either get drafted or go into the Air Force. I didn’t want to get in the mud, so I went with the Air Force.”

Though he went through basic training and air mechanic school — Rysavy was transferred halfway through cadet training when the Air Force shut the program down, he said — he never received his high school diploma. By the time he got out of the military in 1946, he received notice from Pacelli telling him they were automatically graduating him.

“He really never got back to graduate with his classmates,” Jim Hamburge, interim president, said.

Rysavy served in Japan during World War II, where he worked on B-25 bombers. He served about six months into the U.S. occupation of Japan before he was discharged. Once he came back, he worked for a jewelry store and became volunteer fire chief in Newport, where he oversaw 35 firefighters.

About 20 years later, he switched careers and gave up his position as fire chief to work at the local oil refinery, now owned by Erickson Petroleum Corp. Rysavy became a chief operator at the plant and was put in charge of the refinery fire brigade. Since then, he has traveled extensively throughout the U.S. and Mexico, among other places.

He now lives in Hugo, but decided to come back to Austin for Pacelli’s 100th anniversary. Little did he know the surprise that was waiting for him, however. Pacelli officials told Rysavy about the award Friday.

“He deserves a diploma,” Hamburge said. “He has made us proud as a school and as a nation.”

Pacelli educators gave Rysavy an original St. Augustine’s diploma, even helping him to put on a shamrock-green graduation cap and gown while hundreds of alumni hummed “Pomp and Circumstance.”

“It shook me all up,” Rysavy said.

Rysavy may go back to Hugo with a lifetime’s worth of experiences, but he was every bit the high school graduate in front of alumni Saturday.

“Oh, what the heck, let’s go dancing,” Rysavy told the crowd. “You don’t want to listen to me. Let’s go have a party!”