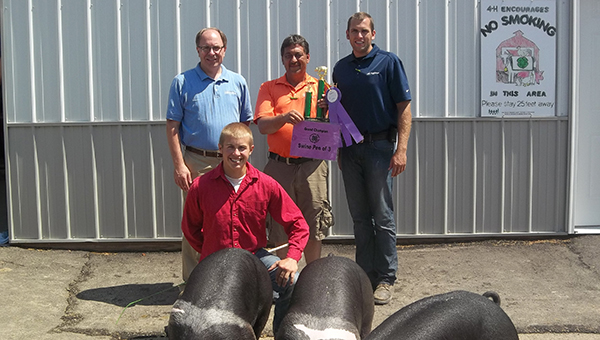 Jacob Sorensen, Alden 4-H Club, showed the grand champion market litter in 2012. It was purchased for $3,000 from various area merchants and supporters. Seated in front is Sorensen. –Submitted

Sorensen, 18, the son of James and Jacque, of Alden, has been showing pigs for seven years and enjoys taking on leadership positions in the pork world.

“The hardest part about being a leader is knowing you’re being watched,” Sorensen said.

Sorensen joined 4-H in 2005 and said everyone is always friendly and helpful.

This year Sorensen went through quite a change. His show barn burned down causing the loss of five generations of genetics that his family’s breeding program had created.

“It has really been working from the bottom up but we have made the best of it,” Sorensen said.

Sorensen said he has a passion for pigs.

“They are pretty much pets,” Sorensen said. “I think that’s where the passion comes from.”

Sorensen said that being in 4-H has given him the skills necessary to become pork ambassador.

“You have so much time wrapped up in the pigs,” Sorensen said. “That’s what makes doing this so easy for me. You really care.”

Being pork ambassador comes with a $750 scholarship. It is a one-year commitment with opportunities to receive more money by helping with different activities.

On Monday, Sorensen will arrive at Farm Fest in Redwood Falls to compete to be named the statewide pork ambassador. Farm Fest is an agricultural expo that Sorensen described as a farmer heaven.

“They need a good advocate,” Sorensen said. “Someone who can communicate and has a good image.”

Sorensen said he guessed they would be looking for a stand-up person, and that being raised in a good home helps him fit that criteria.

Sorensen hopes to continue breeding and owning pigs throughout his life and said maybe one day his kids will show pigs, too.