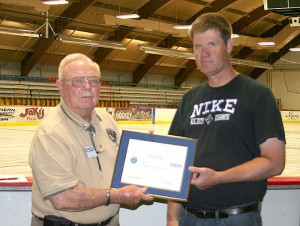 The Patriotic Employer Award is presented by the Office of the Secretary of Defense’s Employer Support of the Guard and Reserve to supervisors who are nominated by an employee serving in the National Guard or Reserve for support provided directly to the nominating Service Member.

According to the ESGR’s website, “The Patriot Award reflects the efforts made to support Citizen Warriors through a wide-range of measures including flexible schedules, time off prior to and after deployment, caring for families and granting leaves of absence if needed.”

Furland was nominated by Spc. Pence A. Upchurch who was a night supervisor at the Arena. Furland said he hopes to have Pence back at the arena this fall.

Norm Hecimovich, Minnesota Region 6 Chair of the ESGR presented Furland with the award.