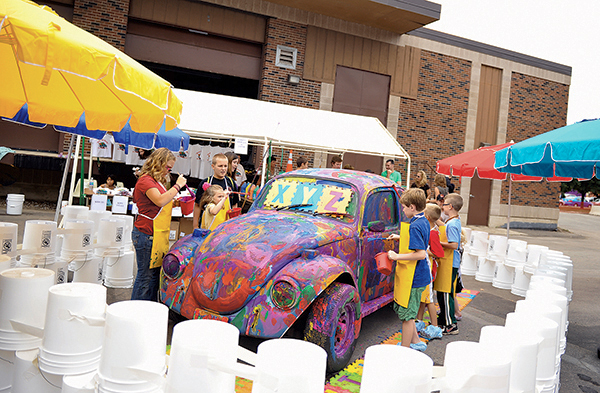 Kids crowd around a VW Bug for a chance to put their artistic touch on it during last year’s Austin ArtWorks Art Festival at the downtown Austin Utilites plant. Eric Johnson/Albert Lea Tribune

This Wednesday, a group of Austin volunteers will start to transform Austin Utilities’ downtown power plant.

They’ll hang ornate decorations on the ceiling. They’ll set up tables, paintings, sculptures, pictures and other pieces of art. They’ll create galleries and lecture spaces and set up places where artists can talk to people about their work. 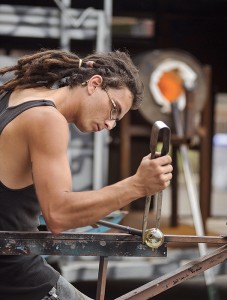 They’ll set the stage for the second Austin Artworks Festival on Saturday and Sunday.

Of course, someone has to coordinate everything. That’s where Jennie Knoebel, Paramount executive director, comes in.

Knoebel is no stranger to arts administration. An Austin native, Knoebel earned her bachelor’s degree at the University of Wisconsin — La Crosse in communications and theater arts, as she knew she wanted to help spread the arts to others.

From there, she managed several theatres and eventually went back to the University of Minnesota for a master’s degree in liberal studies, a self-directed degree. Yet her studies helped to shape the U of M’s arts administration program.

She was hired by the Austin Area Commission for the Arts in March 2011, in part to spearhead an upcoming expansion project to the historic theatre. Before that, she worked for the U of M’s theater department, where she helped put on a variety of events revolving around the Twin Cities theater community.

Knoebel saw potential in a community-wide arts celebration when a group of residents approached her with the idea last year. Austin native Eric Anfinson came up with the idea last spring, and volunteers soon came together to put on the event.

Knoebel said the 60 or so volunteers organizing this year’s festival learned much from their first attempt last year. The group began work in January of this year to make the festival bigger than before, though volunteers started to plan the 2012 festival that April.

“We learned a lot from last year, in the sense that I would say we were more organized in getting a lot of the paperwork done for artists,” Knoebel said.

Festival organizers formed committees to work on various parts of the festival, with Knoebel acting as a catch-all for organizers who weren’t sure how to get certain things accomplished. She was a large help in planning how to run the upcoming festival concert featuring Cloud Cult and Martin Zellar and the Hardways.

“Doing more of the administrative side of the festival is really what I’m involved in,” she said.

Each committee has been busy securing artists and acts since the beginning of the year as well. Many authors had to apply to be part of the festival this year, according to volunteer Janet Anderson.

“We started sending notices out to potential authors in December,” Anderson said.

That’s how organizers managed to bring more than 100 authors, musicians, painters, sculptors and other artists to the festival this year. The festival will kick off at 9 a.m. Saturday, with events taking place throughout the day. Residents will be able to observe art and attend lectures from Anfinson, popular author Amanda Hocking and Austin native Therese Pautz, among other artists. The festival will culminate Saturday evening with Cloud Cult and Zellar starting at 7:30 p.m. While the festival is free, tickets to the concert are $30 and can be purchased through the Paramount Box Office.

Many other events are happening during the festival as well. Pacelli Catholic Schools is hosting an alumni celebration to commemorate the school’s 100th anniversary, which will take place all weekend. AMCAT will host hourly tours of the city starting at the power plant, where participants will pass by the SPAM Museum, St. Augustine Church, Marcusen Park and more. Those tours will take place on the hour from noon to 4 p.m., according to Bonnie Rietz, festival steering committee co-chairwoman.

“If someone’s from out of town and they want to see a little bit of Austin, or if you’ve got a few friends unfamiliar with Austin, you can take them on the tour,” she said.

Organizers are still adding events and elements as well. Downtown Austin is decorated with Austin ArtWorks Festival flags and many shops have art in the windows. Knoebel said a fireworks display will take place after the concert Saturday as well.

With so much to plan, it’s an enormous effort to put it all together, as Knoebel well knows.

“Pretty much every day, all day I’m working on artworks festival things,” she said. “It’s been that way for most of Åugust.