AUSTIN — He’s an eager, attentive, quick learner with a good work ethic. He has high energy, agility and good senses. He’s also a little green, though, and loves his ball. Overall, he’s a good boy. 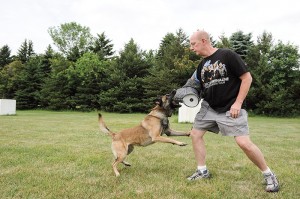 Sonic, a year-and-a-half-old Belgian Malinois, is the rookie on the Austin Police Department. The K-9 is in good hands, though, under the supervision of his owner and trainer, officer Matt Holten.

“This dog is just a complete baby, and a rookie compared to the last one,” Holten said while training with Sonic on Tuesday afternoon on the west side of Austin, where the police department has a dog training setup.

Sonic is honing his skills but still has big tracks to fill, those of his predecessor, Ghost. Ghost, also a Belgian Malinois, died last fall after prolonged complications with epilepsy and six solid years on the Austin Police Department. After steadily increased loads of medication and stress on his organs, veterinarians had to euthanize him.

Soon after, Matt began his search for a new dog. He scoured the Internet and eventually found a breeder in Bowling Green, Ky., where he found Sonic. However, Sonic was already about 9 months old, had no formal training and had never even worn a collar. Still, he showed potential. 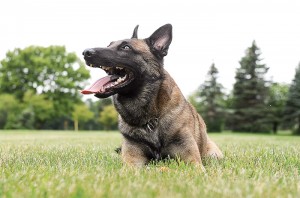 When evaluating Sonic, Matt looked for play drive and prey drive, or how well the dog remained interested in certain activities, like chasing the ball. Clearly, Sonic has that, and he listens well. Matt tossed the ball while Sonic sat by his side. He didn’t flinch until Matt told him to release.

Despite a later start on his training, at 9 months old, and spending less than a year with Matt, Sonic has made strides and shows promise with more complex exercises, like the search. 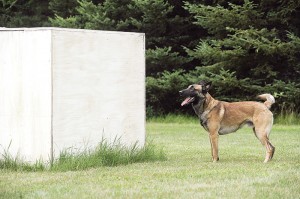 Sonic points out where Matt Holten’s daughter, Alex, was hiding during the K-9’s training Tuesday afternoon.

Holten’s daughter traced a path by several big, wooden boxes and then hid in the last one, the sixth box in the search sequence. Before Tuesday, Sonic hadn’t searched six boxes. He was still stuck on no. 4, so when he discovered Alex wasn’t in the fourth box with his ball, he was stumped.

Sonic looked at Matt for advice, but Matt stood silent, ignoring his co-worker.

“I’m going to let him figure this one out on his own,” Matt said.

After a minute, and barking several times for approval, Sonic realized he wasn’t done. He checked out the fifth box. It wasn’t right. He checked out the sixth box. Sonic knew Alex and the ball were inside, so he sat and looked at Matt for approval. Only, he hadn’t completed the task without three barks in succession. Perplexed, Sonic waited at the box, then he remembered. Three barks in about five seconds, and the ball flew out of the box, and Sonic snagged it.

“I didn’t think he was going to get that on his own,” Matt said.

Instincts for the job

With a strong nose and intuition, Sonic already passed his narcotics certification in February. Since then, he has executed 20 to 30 searches, Matt said. In a few more weeks, he may be certified for apprehension. Officer Ryan Leif often helps Matt by wearing the bite sleeve, teaching Sonic how to take down people and ignore nearby distractions. It’s not a job for everybody, but both officers enjoy it.

“It’s a really hard job, and he doesn’t get any extra pay,” Matt said.

Matt’s confident his new buddy will pass the test and then be able to apprehend suspects, or have officers’ backs if things go badly on patrol. That’s because Sonic has another unique skill set: always knowing where Matt is.

Like any crime-fighting partners, Sonic and Matt are never more than a few moments away from each other. With the press of a button, Matt’s squad car door pops open, and Sonic runs to join him, even if Matt is more than a block away. Sonic uses his best sense, smell, to track Matt’s footsteps.

“He’ll track me to wherever I am,” Matt said. “That was actually one of the first things I started doing when I got him.”

Still, the rookie K-9 is living in the shadow of a legend among police dogs. Ghost won national awards for narcotics, apprehension and working as a team with another K-9 at competitions. Matt doesn’t know if Sonic can match that prestige.

“Ghost was a national champion, and they don’t grow on trees,” he said.

Each day will reveal a little more, though, as Matt trains nearly that often with his partner. And Sonic could mark the end of another era for the Austin Police Department, if things go as planned. Matt said a Belgian Malinois typically offers seven to nine years of good service — about the same amount of time Matt will remain on the force before hanging up the uniform for good.