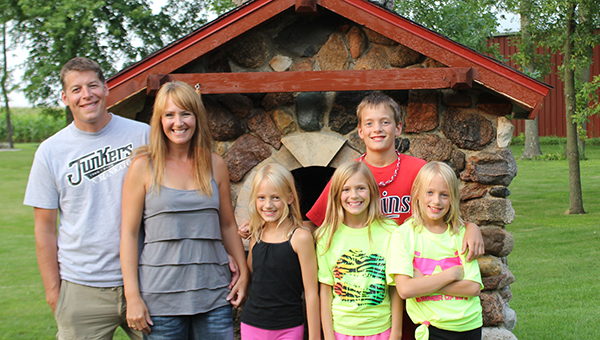 Matt Zebro, left, stands by his backyard oven and his family at their Wells home. –Quinn Andersen/Albert Lea Tribune

WELLS — Matt Zebro finds a use for everything.

For two years, he has put his building skills toward making a rather special pizza oven. In his yard, no less.

“I didn’t really have a plan, but I had heard about pizza ovens.” Zebro said. “So I did a little research online, bought a instructional CD and built it.”

Zebro took leftover firebrick from one of his friends and thought, “I’ll find something to do with this.”

The wood-burning oven can cook a pizza in four minutes at 700 degrees.

To make a pizza, Zebro ignites a wood pile in the center of the oven. He has to wait for it to reach 700 degrees, then he can move the wood out of the way and place the pizza in the center. It takes four to seven minutes to cook the pizza — it’s good to watch the crust — and at the end Zebro raises the pizza up, for just a minute, to the top of the dome where it is cooler to allow the pizza to brown.

The pizza is usually made with homemade dough and sauce. Zebro has been building the pizza oven for two years. Though it has been functional for a year now, the stone siding still needs to be completed. It has taken more stone than Zebro thought would be necessary.

“We are still learning how to work it,” Zebro said.

To create the perfect dome necessary for the oven, Zebro had help from his wife’s stepfather, Dick Hanel. He created a Styrofoam dome so that Zebro could create the dome in layers and once each layer was complete it could be punched out of the Styrofoam so the next layer could be created.

Outside is Zebro’s favorite place to be; his favorite childhood memories involve camping with his family. He likes to play kickball in the yard with his kids and takes them to their sports practices.

“We follow them everywhere that they go,” Zebro said.

Zebro also converted a grain bin into a furnished hangout for his children.

Building things and working on home improvement projects is something Zebro enjoys doing so long as he is outside.

“He always has to have something going on to keep him preoccupied,” Shannon said.

Zebro lives in his 120-year-old original ancestral home with his wife, Shannon, and their four kids. The land they live on also has a playhouse for the children, a guest house, an original summer kitchen, a chicken coop and a furnished schoolhouse that his grandparents attended.

Zebro was born and raised in Wells and has worked at Wells Federal Bank in Wells for more than 15 years as a commercial lender. He went to St. John’s University in Collegeville and majored in economics.