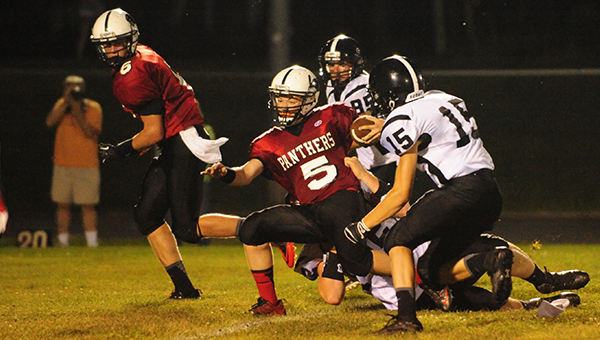 NEW RICHLAND — All of the big plays came through the air on Friday night during the season opener for the New Richland-Hartland-Ellendale-Geneva and Blooming Prairie football teams.

Panthers quarterback Trevor Tracy connected with wideout Preston Peterson in the fourth quarter for NRHEG’s only score, and Blooming Prairie quarterback John Rumpza threw a touchdown pass in each quarter as the Awesome Blossoms won 28-7.

Both defenses were stingy against the run. NRHEG held Blooming Prairie to fewer than two yards per carry. Although, that didn’t stop the Awesome Blossoms from trying. Blooming Prairie rushed the ball 38 times — 14 more attempts than the Panthers.

“We handled their run quite well,” NRHEG head coach Dan Stork said. “They were big up front and physical, but our interior line and linebackers played well.”

However, NRHEG didn’t fare much better on the ground. The Panthers were held to 45 yards on 24 carries — 0.3 yards per carry more than the Awesome Blossoms.

Blooming Prairie scored the first points of the game with 6 minutes and 38 seconds left in the first quarter. The Awesome Blossoms added another touchdown with 48 seconds remaining in the second quarter to take a 14-0 lead at the half.

NRHEG scored its touchdown on a 67-yard pass with just under 5 minutes left in regulation. Peterson caught the pass about 30 yards down the field, broke a tackle in the secondary and dashed to the end zone for his first varsity touchdown.

“I just tried to beat the defender and execute the play,” Peterson said. “It just went from there.”

Tracy started his first varsity contest behind center. He was 7-of-15 through the air for 132 yards and a score.

NRHEG’s defense was led by Dillon Parpart and Nick Bartness. The duo tied with a team-high 13 tackles and regularly pressured Rumpza. Spencer Tollefson and Peterson added seven tackles each. Tollefson also had an interception.

Kickoff was moved from 7 to 8 p.m. due to heat concerns.

Next, the Panthers host Waterville-Elysian-Morristown at 7 p.m. Friday. The Buccaneers are coming off a Week 1 loss at home 35-8 to Tri-City United. 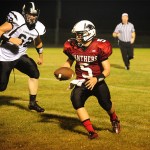 Trevor Tracy of New Richland-Hartland-Ellendale-Geneva runs to daylight around the left side of the line Friday against Blooming Prairie. Despite holding the Awesome Blossoms to fewer than two yards per carry, the Panthers lost 28-7. — Micah Bader/Albert Lea Tribune 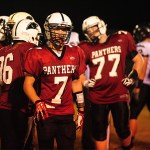 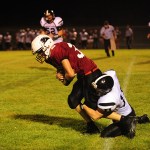 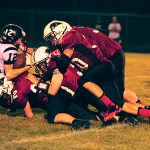 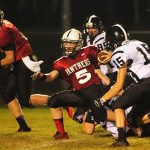 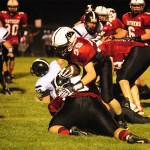