Moral absolutism has no place in schools, and compassion should trump the rules sometimes.

That was just one of many lessons author and speaker Barbara Coloroso gave to community members in Albert Lea on Tuesday. Coloroso gave presentations and workshops with the title “Understanding Bullying and Empowering Ourselves” to four different groups on Monday and Tuesday.

Tuesday’s presentation was for any interested community members and school workers. Coloroso gave the audience an example of a time when caring would trump a rule. If a school has a rule that children cannot use a cellphone at any time, then that’s a good rule, Coloroso said. But what if a child’s parent who is deployed to war calls them during school? Then, Coloroso said, caring and compassion should trump that rule.

“We have rules for two reasons: safety and how we relate with other humans in a healthy way,” Coloroso said.

Coloroso also gave advice for disciplining children. In her years as a teacher she found that children do wrong in three ways: mistakes, mischief and mayhem. Since all three are different levels of intent, Coloroso thinks that discipline should match the level of intent. But no matter what, children must learn to own up to the mistake, fix the problem, learn from it and move on. She explained that it’s important to teach children that mistakes happen, and that if one does all the child needs is a good plan. 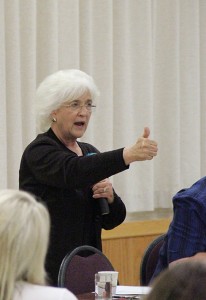 Barbara Coloroso speaks to a group of community members at First Lutheran Church on Tuesday. Coloroso was in Albert Lea speaking to various groups about bullying and how to prevent it. –Kelli Lageson/Albert Lea Tribune

“They need a good plan — not a good excuse,” Coloroso said. “Kids will hide their problems if they think mistakes are bad.”

Working with the bully is also an important part of the equation. Coloroso uses the restitution, resolution and reconciliation process. Restitution means the child has to fix what they did, resolution means they need to find a way to keep it from happening again and reconciliation is the process of healing the hurt they caused. That process of restorative justice hit home for teacher Taryn Israel-Nechanicky.

“It’s a good reminder of how to help,” Israel-Nechanicky said.

Coloroso spoke to four different groups while visiting Albert Lea. On Monday morning she presented a workshop to staff from the Albert Lea School District. She had a small noon luncheon, and then presented to teens and parents on Monday evening. Tuesday morning she spoke to any interested community members at First Lutheran Church.

The church’s education director, Jenny Edwin, brought the idea of having Coloroso visit to the First Lutheran Church’s education commission. Edwin said she’d read Coloroso’s books, “The Bully, the Bullied, and the Bystander” and “Kids Are Worth It!,” and thought Coloroso would be a good resource for the community and anti-bullying advocates.

“It’s a community problem,” Edwin said. “So we wanted it to be open to the public.”

Coloroso said she’s been presenting for 40 years and her main goal is to create a generation of children who want to make a difference and who care deeply. She said she has seen some successes, like that hazing is not always a norm and that more people recognize the difference between conflict and bullying. 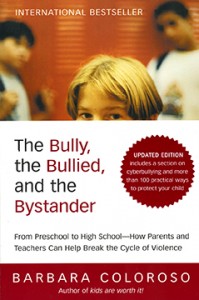 “I’m hopeful for this next generation,” Coloroso said.

Coloroso said she was impressed by the number of attendees to her presentations and the different careers they represented. She said she spoke to educators of all grades and early childhood programs, community members, police officers and probation officers, among others. She appreciated that even though First Lutheran Church brought her to Albert Lea, that people from all walks of life could come to learn.

“They were very inclusive,” Coloroso said.