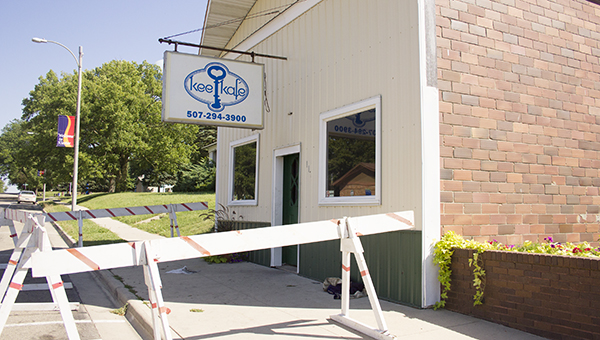 The front doors to the Kee Kafe are barricaded Thursday morning after an electrical fire started in the restaurant early that morning. –Sarah Stultz/Albert Lea Tribune

One of the owners is on fire department, received fire call
KIESTER — As a member of the Kiester Fire Department and ambulance crew, Michele Knutson is always on call.

But when she received a page early Thursday morning, she didn’t expect that call to hit so close to home.

Right before 2:30 a.m., a page came through to Knutson and her fiance, Jerry Alphs, who is also a firefighter, that there was a fire at the Kee Kafe.

Knutson, who opened the cafe in May with co-owner Tammy Henthorne, said her heart sank.

The motion detector had gone off in the building, but after further investigation it was determined there was not a break-in, but a fire.

Kiester Fire Chief Brandon Hagenson said the fire started with some old wiring in a wall in the back corner of the dining room. When firefighters arrived, there was smoke and fire in the corner.

“It’s devastating,” Knutson said. “This has been a dream of mine a long time, ever since I graduated high school.”

She said she and Henthorne were close to paying off their startup costs, and the walls were slowly being decorated with memorabilia of Kiester. People had donated old athletic shirts and jackets, and the cafe was reminiscent of former days in Kiester, she said.

The women purchased what used to be the old Brickhouse Pizza building around mid-March after the building had sat empty for 3 1/2 years. They cleaned, painted, gutted the basement, completed duct work and updated some of the electrical prior to opening in May. Hagenson said the wall, ceiling and floor sustained structural damage and the whole building sustained smoke damage. He estimated the damages totaled about $85,000.

The Kee Kafe’s Facebook page stated the restaurant will be closed indefinitely, however, Knutson said she was awaiting word from her insurance adjuster before deciding what her next steps would be. He was expected to come Thursday afternoon.

In the meantime, the cafe is barricaded.

Duane Pederson of Duane’s Felco, which is about a block away from the Kee Kafe, said he hopes Knutson and Henthorne will reopen the restaurant.

Pederson said he ate at the cafe a couple times a week.

“That, along with the grocery store opening up again, has been really good for our town,” he said.

The Kiester Fire Department was assisted by the Bricelyn and Walters fire departments because of high temperatures.