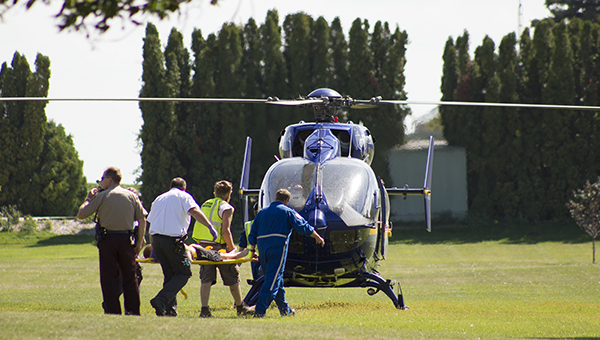 Emergency responders carry a child who crashed into a car to a Mayo helicopter Thursday afternoon from the park near First Baptist Church in Clarks Grove. — Sarah Stultz/Albert Lea Tribune

CLARKS GROVE — An 11-year-old child was airlifted to St. Marys Hospital in Rochester Thursday afternoon after he reportedly crashed his bicycle into a car backing out of a driveway. 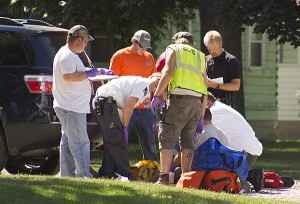 Gold Cross paramedics and other emergency responders take care of a child who crashed into a car at 208 E. Main St. in Clarks Grove Thursday afternoon. — Sarah Stultz/Albert Lea Tribune

The boy, whose name has not been released, was transported by ambulance to the parking lot of First Baptist Church, where he was loaded into a Mayo helicopter that landed shortly after in the park next to the church.

Sheila Kay Hansen, 50, was reportedly backing out of a driveway at the residence when the boy cut southeast through the yard and crashed into the back corner of the vehicle, Strom said.

The boy was with other children, who reportedly witnessed the incident.

The boy’s condition this morning is unknown.