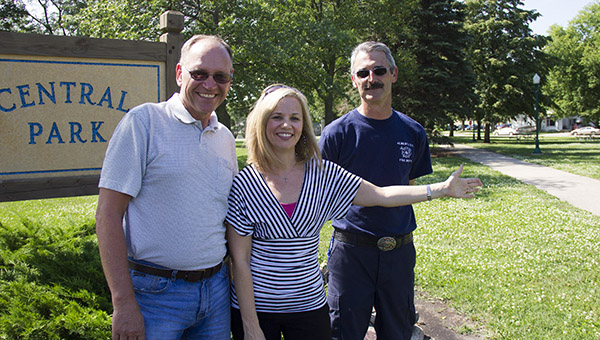 Jenny Nelson with the Albert Lea Inspections Department, center, gestures to Central Park, where the first of three neighborhood picnics is scheduled to take place Thursday evening. Standing beside her are Brad Pirsig with the Utilities Department and Mark Light with the Fire Department. –Sarah Stultz/Albert Lea Tribune

Albert Lea city employees are hosting three neighborhood picnics in the next two weeks to give residents the opportunity to find out more about the various city departments and meet with each other.

The first picnic, starting at 5:30 p.m. Thursday, will be at Central Park. The remaining picnics will be 5:30 p.m. Aug. 14 and 15 at Wedgewood Park and Pioneer Park, respectively.

“Part of this was trying to get people from the neighborhoods out to see each other,” said Albert Lea Fire Capt. Mark Light, who has been a part of the planning committee. “Some of it is trying to put a face with different functions of the city.”

Light said this will be the second year the city will host the picnics, after the initiation of the picnics with the AARP/Blue Zones Vitality Project. Each city department will have a representative on hand to offer handouts and to showcase different pieces of equipment. They will explain the responsibilities of each of the departments.

He said a Fire Department crew will be on hand at each of the picnics and will have its new rescue boat, along with a fire truck. The Police Department will have a squad car and information about crime-free housing and the bike patrol, among others.

“If you want to talk to someone face to face on things, it’d be a good opportunity to do that,” Light said.

“It’s an opportunity to engage with city staff and council members to learn about some of our services, to learn about some of our initiatives that we have going on in the city, and also to engage with us and hear some feedback on whatever it might be,” said City Manager Chad Adams. “It’s an informal way, more of a casual way, for all of our city officials to hear from our residents.”

He commended the National Vitality Center for being a partner in the project, with the common goal of promoting active living and social connections.

Light said Albert Lea firefighters will cook hot dogs, and there will be chips, cookies and lemonade. The National Vitality Center is sponsoring the food.