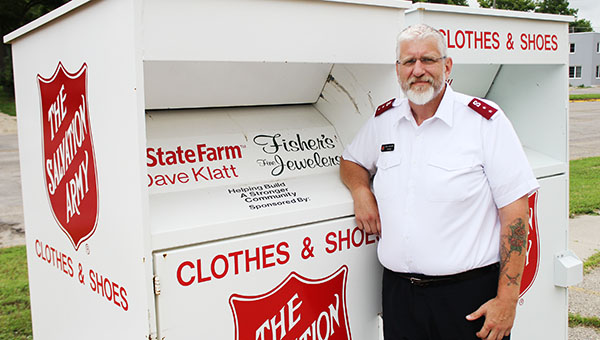 Salvation Army Capt. Jim Brickson leans against a drop box at the former Buy-N-Save on South Broadway last week. The second drop box, behind him, is awaiting approval for a location. –Tim Engstrom/Albert Lea Tribune

There is a battle for used clothes in Freeborn County.

Drop boxes are all over the county put there by three different entities. The Salvation Army has 13 and another one ready to set out. The Glaydon Iverson chapter of Disabled American Veterans has two. And a company called USAgain has eight.

It used to be the only place to take old clothes was the back of the Salvation Army thrift store. Thanks to the drop boxes, there are places just about anywhere locals shop.

Albert Lea Salvation Army Capt. Jim Brickson set out six drop boxes in March 2012 when he noticed the thrift store was losing donations to USAgain, which was first to set out boxes for unwanted textiles around Albert Lea.

Brickson wanted people to know that USAgain’s boxes do not support social needs in Freeborn County. USAgain is a for-profit company that operates in 17 states and sells used textiles worldwide as a commodity.

The local Salvation Army has an annual budget of $1.3 million, and about half of that comes from donated clothes, he said. The thrift store alone makes $475,000 a year.

“I am passionate about serving the needs of the county,” Brickson said.

So what happens to the clothes and shoes placed in the boxes?

The captain said they go to the thrift store, 416 Bridge Ave., to be sorted, then hung on the floor for resale. In an item’s fourth week on the rack or shelf, it goes on sale. If it isn’t sold that week, it is bundled and sold to a brokerage that pays by the pound. It takes the bundles to a large Salvation Army facility in Davenport, Iowa. There, the organization runs an adult rehabilitation center for men.

“We try to keep them within the Salvation Army system,” Brickson said.

He said there are, on average, four men from Freeborn County in the rehab center.

The clothes are again attempted to be sold, but if not, they are placed in 1,100-pound bales and sold as a commodity anywhere in the world.

The commodity is called “mixed rags.” Brickson said a semiload of 45,000 pounds sells for about $6,750. The price fluctuates depending on the day’s rate. In Albert Lea, it takes three months to gather enough to fill a semitrailer.

The local Salvation Army sought to place the drop boxes in neighborhoods with high-family densities and in some rural towns of Freeborn County, he said. After shipping and painting, the boxes cost $1,100 each, and the Salvation Army has offset the cost partially by selling sponsorships of $500 per box.

When placing clothes in USAgain, the items go straight to the mixed rags commodity market. The bins clearly state USAgain is “a for-profit clothes collection company” and state the donations are not tax-deductible. The USAgain website notes that its collection efforts have kept millions of pounds of textiles and shoes from reaching landfills. It is headquartered in Chicago.

“Extending the life of clothes and shoes reduces environmental degradation from the manufacturing of new clothing and makes for a healthier planet,” the USAgain website states.

Clothing dropped in a box from the Disabled American Veterans is sold to a thrift store in Rochester called Savers, said DAV Cmdr. Todd Bergland. The organization also takes appliances, wheelchairs, sporting goods, joggers and items that often don’t fit in a drop box. Bergland said donors can contact him about those goods at 507-383-0275.

Bergland, like Brickson, wanted people to know that donating to a DAV drop box benefits locals. He encouraged people to give to either the DAV or Salvation Army boxes.

The proceeds benefit the local chapter, and many DAV chapters across Minnesota have participated in this program. DAV is a charitable organization that assists veterans wounded in combat, as well as their spouses and children. It works to ensure veterans can access benefits, lobbies for them on Capitol Hill and educates the public about their sacrifices, in addition to providing a means for disabled veterans to socialize and perform local advocacy.

The local chapter uses their proceeds for programs such as an annual $500 scholarship it hands out, Bergland said.

Brickson said people still can drop off clothes the old-school way, by coming by the back of the Salvation Army thrift store between the hours of 8:30 a.m. and 5:30 p.m. Monday through Saturday.

1. The Salvation Army, Bridge Ave. side

2. The Salvation Army, Sibley St. side