Disc golfers duke it out 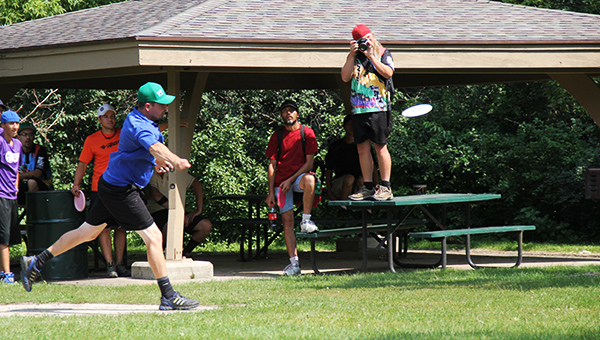 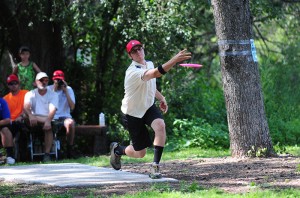 Chris Hall of Zimmerman throws a disc on Hole 1 during the final round of the Minnesota State Disc Golf Championships at Oak Island Disc Golf Course. — Micah Bader/Albert Lea Tribune

The Minnesota Frisbee Association typically holds its state championships at courses in the metro area. Meyer and others wanted to change that this time, and the two courses made Albert Lea a prime choice.

Along with running the tournament, Meyer, 35, of Woodbury, also won the tournament. He competed in the open division, which is the pro class. (Final results were posted as of this morning. Look for them this week in the Scoreboard.)

Meyer has a special connection with C.P. Adams in Hastings, he said. In 1999, he aced Hole 7, but moments before he had received heart-wrenching news: His brother Justin died after a 22 1/2-year battle with kidney failure. 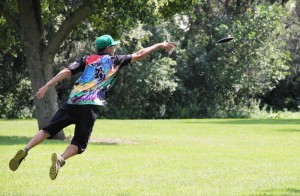 “Disc golf is therapy for me,” Meyer said. “It’s my escape.”

The Hastings Parks and Recreation Department heard what happened and gave Meyer the basket from his hole-in-one. The course was getting new baskets at the time.

The Minnesota State Championships is a B-tier tournament sanctioned by the Professional Disc Golf Association.

John Gabrielli, 23, of Roseville competed in the amateur advanced division, which meant he was unable to compete with the professionals for the title in the final nine holes. Once a player becomes a professional, he or she is not allowed to compete in amateur events. Gabrielli said he played as an amateur because he plans to play at the Amateur Disc Golf World Championship. 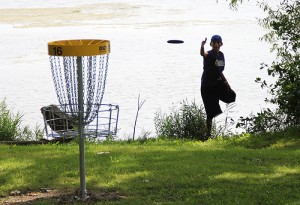 With the water of Bancroft Bay in the background, Ray Oberly Jr. of Keewatin putts Sunday on Hole 16 of the Oak Island Disc Golf Course. — Tim Engstrom/Albert Lea Tribune

“I grew up down the street from the Acorn Park disc golf park,” he said. “Some friends and I decided to try it out, and ever since then I’ve been playing.”

Not only did players from around the state compete, Albert Lea had several players who competed. The only one playing as a pro was Jared Johnson.

It took some misfortune for Johnson to take up the sport. When his house burned down, he lived in a motel for a month. During Johnson’s stay, he discovered a nearby disc golf course.

“I played there for an entire month and fell in love with it,” Johnson said. “I just like being able to be outside and watch Frisbees fly.”

Johnson, originally from Boise, Idaho, has played competitively since 2007. He said he played multiple courses in the Northwest, and the parks in Albert Lea are designed well. 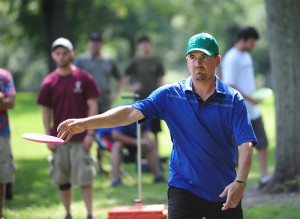 Chris Meyer, 33, of Woodbury throws a disc during a throw-off for the ace pool at Oak Island Disc Golf Course at Bancroft Bay Park. Because no one hit a hole-in-one, players competed to see who could get their disc in or closest to a basket. Meyer didn’t win the throw-off, but he did win the tournament. — Micah Bader/Albert Lea Tribune

“It has definitely helped all the players in town,” Johnson said. “I’ve seen improvement in all of our games, because it’s a technical course.”

Meyer said he was happy with the turnout of 59 players, and he’s hoping for 150 to 200 players next year.

“I’d like to say thank you to Critter for running the tournament and to everyone who came out,” Johnson said. “It was a great weekend.”

Check the Tribune’s photos of the tournament in this gallery.