Gallery: Could ethanol be cut? 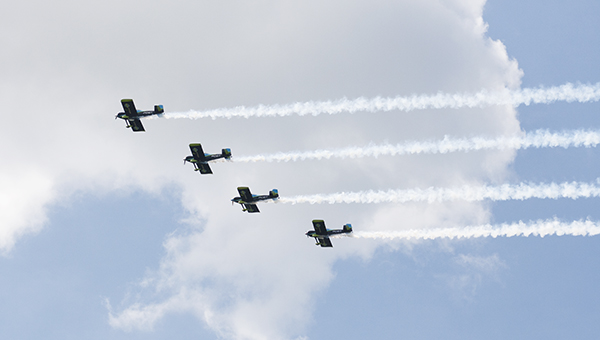 Members of the Vanguard Squadron fly over Poet Biorefining near Glenville Wednesday during the company’s member appreciation luncheon. The planes fly using fuel made up of 100 percent ethanol. –Sarah Stultz/Albert Lea Tribune

The federal standards started in 2005 and require fuel that is sold in the United States to contain a minimum volume of renewable fuels. They require increasing amounts of renewable fuels to be blended into gasoline and diesel each year.

The standards are at risk of being repealed, said Mike O’Brien, vice president of market development for Growth Energy. 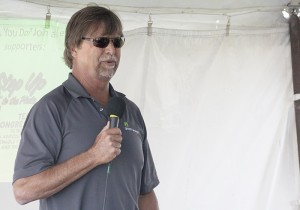 The comments came during a membership appreciation luncheon at the Poet Biorefining ethanol plant near Glenville with O’Brien and Growth Energy officials, along with Poet’s own political action committee.

O’Brien said he works to reduce the commercial barriers of ethanol, including myths that ethanol is going to damage cars.

Two of his main goals are to protect the renewable fuel standard and to encourage commercialization of E15, a blend of 15 percent ethanol and 85 percent gasoline from oil.

He said he is working to sign up at least 20 retailers in the Twin Cities area to offer E15 in the next year. So far, 10 retailers have signed up and there are 12 more in the works.

“From an organized standpoint, Minnesota could become the leader on E15,” O’Brien said.

He said the organization is focusing on getting the retailers first in the Twin Cities because 70 percent of the gasoline used in the state is in the metro.

“When we accomplish it there, we can pretty much do it anywhere,” he said.

The E15 blend would be about 5 or 6 cents less per gallon than the low-grade of unleaded fuel but would only be able to be used by cars made in 2001 or later.

The Minnesota Corn Growers and the Minnesota Department of Agriculture have set up $3 million in grants to help in equipment costs for the program.

“This is all possible because of your support, your help,” O’Brien said.

During the luncheon, people visited with members of the Alden-Conger Supermileage team, which brought endurance cars that runs on ethanol. They admired Albert Lea auctioneer Greg Jensen’s race car that runs of ethanol, and they witnessed a short air show by the Vanguard Squadron, a team of four airplanes that have been powered by ethanol since 1993. 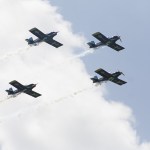 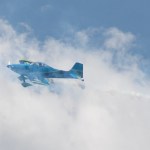 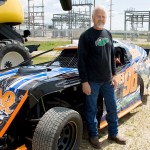 Auctioneer Greg Jensen stands next to his race car that runs on ethanol Wednesday at a Poet Biorefining membership luncheon. 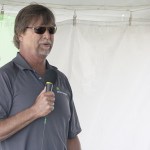 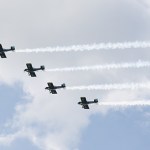 Members of the Vanguard Squadron fly over Poet Biorefining near Glenville Wednesday during the company’s member appreciation luncheon. The planes fly using fuel made up of 100 percent ethanol. –Sarah Stultz/Albert Lea Tribune 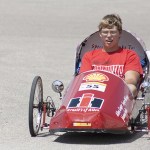 Jacob Wallin of the Alden-Conger Supermileage Team rides in a biodiesel car that set a North American record in a competition in Houston, Texas that runs 1,017 mpg.