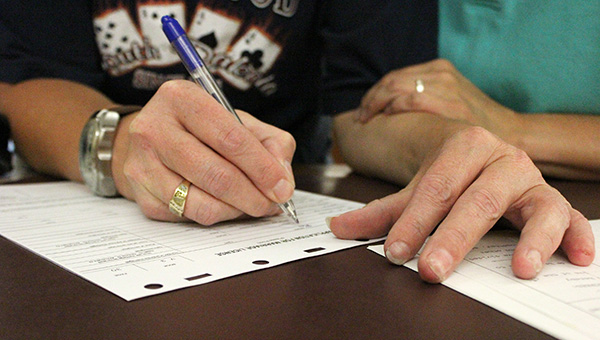 Della Hill of Albert Lea fills out a marriage license for her and Virginia Chadbourne, who are planning to get married later this month. –Sarah Stultz/Albert Lea Tribune

Albert Leans Della Hill and Virginia Chadbourne said though they were looking forward to their upcoming wedding later this month they had mixed feelings about how the news would be received in the community.

They shared their names with the Tribune and agreed to have their photo taken, but they were hesitant for fear they could be the target of vandalism because of their decision to be married. Marriage licenses are public documents, and being public about their love could be a hurdle for some gay couples to overcome. 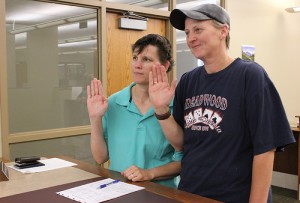 Virginia Chadbourne, left, and Della Hill raise their hands while applying for a marriage license Thursday at the Freeborn County Recorder’s Office. Chadbourne and Hill were the first same-sex couple in Freeborn County to apply.

In November of 2012, 60 percent of Freeborn County voters voted to approve a constitutional amendment that would recognize marriage solely as between one man and one woman.

The support to ban gay marriage was less statewide, with only 47 percent of voters choosing to support the amendment, aimed at preventing a court ruling that legalized gay marriage.

Minnesota estimates about 5,000 gay couples will marry during the law’s first year. Minnesota and Rhode Island this week became the 12th and 13th states to legalize gay marriage across the country. Across the border, Iowa legalized it in 2009 after a court ruling. It was the third state to allow gay marriage.

“I didn’t expect to cry quite that hard,” said a beaming Cathy ten Broeke, who with Margaret Miles was the first gay couple to wed at City Hall.

“We do,” the couple and their 5-year-old son, Louie, said to cheers as they promised to be a family.

Gov. Mark Dayton had proclaimed Aug. 1 to be “Freedom to Marry Day” in Minnesota. Celebrations in Rhode Island were more muted, which advocates said was probably because so many nearby states already allow same-sex marriage.