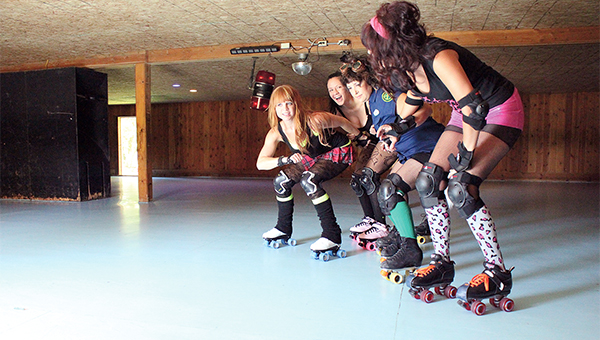 BROWNSDALE — While plenty of adults spend their weeknights in community kickball or softball leagues, a growing group of women is rolling into something a little more retro: roller derby. 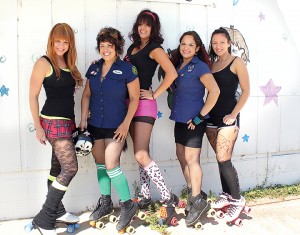 From left, Christine Stiehm, Carley Carranza, Alisa Rolands, Jeanelle Karow and Tya Rohl hang out at Rohler Rink in Brownsdale on Saturday. The group, along with others, hopes to start a roller derby league in southern Minnesota. — Matt Peterson/Albert Lea Tribune

With goofy outfits, roller skates and a need for thrills and spills, area women have been sharpening their skills on eight wheels for nearly two months at the Brownsdale Rohler Rink, with hopes of forming their own league.

The rough sport in which teams of skaters battle each other on a track, perhaps better known in the 1970s and ’80s, has made a comeback and is grabbing the attention of southern Minnesota women via Facebook and word of mouth. Locally, it started on a whim.

“I was wearing a roller derby shirt and my cousin was like, ‘Hey, let’s start a team,’” said Carley Carranza, who now regularly practices with a group of skaters, including her cousin, Jeanelle Karow of Albert Lea.

Area women practice skating in a group Saturday at Rohler Rink in Brownsdale.

Others quickly joined, including Christine Stiehm of Austin, Alisa Rolands of Glenville and the Rohler Rink’s Tya Rohl. Now more than a dozen have joined the ongoing practices, and as many as 15 have gathered for the regular Monday-night practices at Rohler Rink, held from 6 to 8 p.m.

A Facebook page, set up last week, nabbed 177 likes in about one day, and nearly 70 women have become members.

Because the popularity of in-line skates (i.e. Rollerblades) overtook roller skates in the 1990s, some participants have found it difficult to revert to the “earlier days” of skating. Despite the challenges, though, some find it more fun.

“I never skated until I joined them,” Rohl said, who laced up the skates with the others Saturday morning for a group practice session.

While roller derby is an entertainment show of carnage and speed for the fans, there are rules and specific techniques for safety, such as getting up without using hands because roller skates and fingers don’t mix well. Learning how to fall is another important technique, the first one the women practiced with the help of former pro skater Ben Weis, of Austin, who is the coach. And the women will have plenty of time to sharpen their skills and turn radiuses. They will practice for a year with hopes to join the Women’s Flat Track Derby Association until fall 2014.

“We hope to join that, but of course, there are certain qualifications we have to meet,” Stiehm said.

Other teams, such as those from Rochester, Mankato, La Crosse, have already been competing with hopes of joining the WFTDA, as well.

In the meantime, the local, growing group encourages more women to join the initiative on Facebook, or simply show up to Rohler Rink on Monday night and check out the fun. After all, that’s what the whole thing is about.

“It’s just all about fun,” Stiehm said. “Roller derby girls have almost kind of alter egos, where each roller derby girl has a name and a persona. We kind of take on different personal characters, so it’s really brought to life in sort of a fun way.”

To further their cause, the skaters have scheduled a fundraiser from 4:30 to 9 p.m. Aug. 31 at the Blooming Prairie Servicemen’s Club to help build their organization. To find out more about the group calling itself the Roller Derby Girls of Southern Minnesota, go to https://www.facebook.com/SouthernMNRollerDerbyGirls.