Have lunch at the Lunch Box 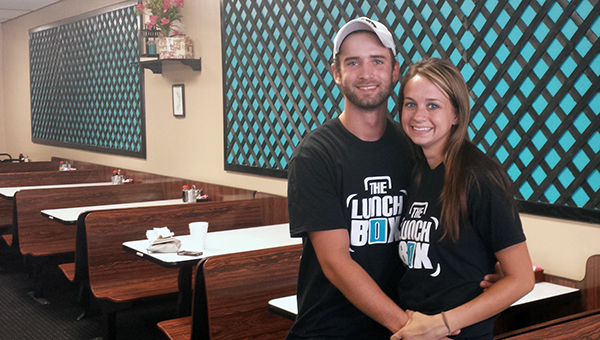 Derek and Emily Dittrich opened The Lunch Box in May on Broadway Avenue in New Richland. The restaurant offers homestyle food six days of the week. –Sarah Stultz/Albert Lea Tribune

NEW RICHLAND — It has been a whirlwind six months for Medford couple Derek and Emily Dittrich.

In that time, the couple got married, had a reception and went on a honeymoon. But if that wasn’t enough, about three months ago they also opened a new restaurant called The Lunch Box on Broadway Avenue in New Richland.

“The feedback has been better than I expected,” said Derek, 25. “People have come up to us and said thank you for opening the business.”

The Lunch Box, at 104 Broadway Ave. S., is in the former location of Blondie’s Grill.

Derek said it has always been his dream to open his own restaurant and when the opportunity came up, he and Emily jumped at it.

In between planning for their wedding, reception and honeymoon, the couple made plans for the restaurant. They were married in March, came up with the name of the restaurant when they were driving back from their honeymoon and then they repainted and redecorated the building in time to open May 6.

Emily left her full-time job at a child care facility to focus solely on the restaurant, and Derek drew on his experience in the kitchen at George’s of Geneva, which is owned by his parents, Steve and Jodie Dittrich. He spent about six years there and worked his way up to kitchen manager.

Though they have to drive 35 minutes from their home to the restaurant, Derek and Emily said they have enjoyed opening the business and meeting customers.

Emily said the restaurant offers homestyle cooking, with burgers being the most popular selection by customers. There is also a children’s menu.

They are planning updates to the menu within the next month based on input from the community.

A 42-inch TV set is mounted on the wall, which will be showing football games on Saturdays and Sundays this fall.