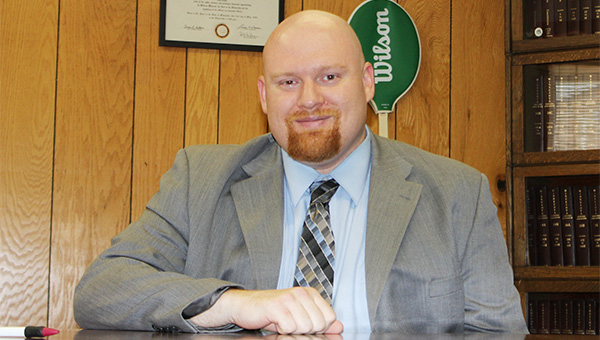 “The golden rule is good,” said Hardeman. “If everyone just stuck to that we would be good.”

Hardeman grew up in Mount Pleasant, Iowa. Where he said he liked watching hockey, playing tennis and learning Dutch.

He said he always knew that he wanted to practice law.

“You can tell that he loves law,” said Allan Halvorsen, a lawyer for 22 years at Goldman, Sturtz & Halvorsen.

He attended the University of Minnesota to study political science and then furthered his studies by attending Hamline University law school.

“My proudest moment is when I graduated law school,” Hardeman said.

After graduation, Hardeman clerked for a judge in Rochester for three years before moving to Albert Lea this last April.

Hardeman enjoys Minnesota now because he can play ice hockey, which he enjoyed watching growing up.

He said he enjoys Albert Lea in particular because he can see lightning bugs, which had been hard for him to find in a bigger city.

Hardeman said Goldman, Sturtz & Halvorsen is not a typical place.

“No one drinks coffee,” Hardeman said. “We don’t golf. We are like the weird law firm.”

Hardeman met his wife, Dessari, 13 years ago, working at McDonald’s, and they now have a daughter named Arabella.

“My greatest accomplishment is helping to make the world’s cutest baby,” Hardeman said.

He said that maybe he needs some new goals. He feels as if he has accomplished his goals and is happy in life.

“I try not to think about things that have gone wrong in life,” Hardeman said.

Hardeman said he is a passionate person and a big softy.

“He is very level-headed,” Halvorsen said. “He connects well with others and is easy to get along with.”

He enjoys working for his clients, playing or watching hockey and playing tennis. Hardeman has taken a break from sports after he injured himself shoveling snow after the May snowstorm that struck Albert Lea. He does his own lawn work.

“I have a push lawn mower,” Hardeman said. “People think that is weird.”

Hardeman is excited to play sports again and hopes to try kayaking soon. Hardeman said he wants to see all of the Major League Baseball stadiums. He has seen 12, including Dodger Stadium, Miller Park, PNC Park, Wrigley Field, Target Field and Kauffman Park.

Interesting fact: He met his wife at a McDonald’s restaurant when he and she were both working there.