Helen Garbisch, 96, of rural Brownsdale, died on Thursday, Aug. 1, 2013, at the Cedars of Austin. Funeral services for Helen will be at St. Michael’s Lutheran Church in Waltham at 11 a.m. Wednesday with the Rev. John Heruth officiating. Visitation will be from 9 to 11 a.m. at St. Michael’s prior to the service. 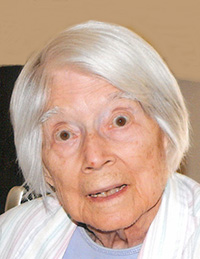 Helen Gertrude (Rinner) Garbisch was born May 19, 1917, in Austin to David and Margaret (Scholl) Rinner.  She grew up on a farm west of Austin where her father operated a dairy and grew vegetables to sell. As a young girl, she helped her father deliver milk and vegetables to their customers in the Austin area. She attended the Woodlin School in Austin and graduated from Austin High School in 1935. She was employed by the Agricultural Stabilization and Conservation Service (ASCS) prior to her marriage to Gilbert Garbisch on Jan. 1, 1941, at the Methodist Church in Austin. Helen and Gilbert moved to the farm near Brownsdale where they raised turkeys, chickens, pigs and beef cattle. She helped on the farm, and when her four children were young, she worked with them on 4-H projects involving livestock and domestic activities. Helen was a great cook, and became known for her home-made bread, angel food cakes and apple pies. As an active member of St. Michael’s Lutheran Church, she was involved with Ladies Aid, Circle, as well as teaching Sunday school. Also at St. Michael’s, she was active in the Missionary Society where she helped sew quilts for Lutheran World Relief which sent many of the quilts to post war Germany and other European countries. She was also active in the Know your Neighbor Birthday Club and a camera and card club in her earlier years.  Helen and Gilbert loved to travel, and they especially enjoyed taking the family on an annual summer vacation. The children were always excited to go up north.

She was preceded in death by her parents, Margaret and David Rinner; and by her husband Gilbert in 1991.  She remained on the farm until she moved to the Cedars about 10 years ago. During her last few years, dementia clouded her mind.