Richie Lee, a 23-year-old from Des Moines, will perform two shows at the Mower County Fair to bring back music from the rock ’n’ roll in the 1950s. 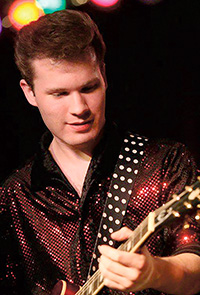 Richie Lee will be playing this week at the Mower County Fair.

According to Lee’s bookkeeper, Myra Jongbloedt, Lee became interested in ’50s music after hearing his parents play it as a child. When he was 13, he started his own band, and he’s been performing for audiences around the region ever since.

“He’s a great guitar player,” said Gary Litender, an Austin resident and devoted fan. “If you like ’50s and ’60s music, this is the guy you want to listen to.”

Lee will sing vocals and play his 1955 Fender Stratocaster, with local musicians on backup at 4 and 6 p.m. Thursday at the Mower County Fair.