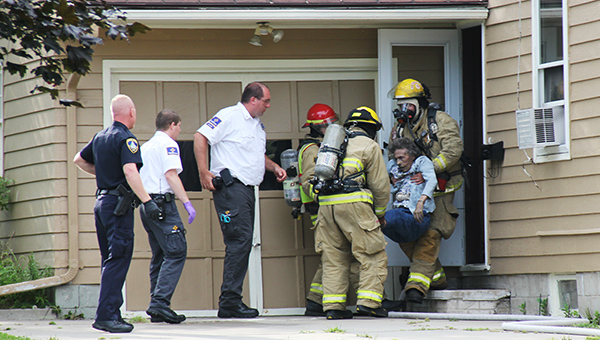 A 94-year-old Albert Lea woman was taken to the local hospital with severe smoke inhalation as a result of a fire inside her home Wednesday.

Albert Lea firefighters carried Helen Modderman out of her home at 410 Bel Aire Drive. Her son-in-law, Steve Haukoos, called 911 shortly after 5 p.m. He and his wife, Jane, who is Modderman’s daughter, had been checking on Modderman three times a day, he said. She had fallen in June and had been back in her home for about three weeks.

The daughter checked in the morning. The son-in-law checked at 1 p.m. and called at 3:20 p.m. When he arrived a few minutes after 5, the interior “was pure black,” Haukoos said, “ and I couldn’t get in.” 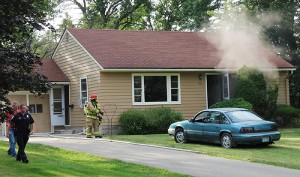 He said he was told Modderman had a pulse. A Gold Cross ambulance and staff tended to her before departing for Mayo Clinic Health System in Albert Lea. Haukoos wasn’t sure what cause the fire.

Albert Lea Fire Department Capt. Lee DeVries said no cause had been determined and he planned to call the State Fire Marshal’s Office to assist with investigating. Alliant Energy workers arrived about at 5:35 p.m. and began inspecting the home.

The damage appeared restricted to the interior of the home, DeVries said. None was visible from the exterior.

Lt. Darin Palmer of the Albert Lea Police Department was the first to arrive. He busted in the front door and opened the unlocked side door to create a draft. Smoke began pouring out of the home.

Firefighters set up hoses, doused flames, then carried the woman out. They then placed fans by the side door and more black smoke billowed out the front.

The home is three doors north of the Bel Aire Motor Inn and overlooks U.S. Highway 69 and the parking lots for Skyline Plaza and the former Walmart.