Army Lt. Paul Overgaard of Albert Lea jumped out of an airplane with the 187th Airborne Regiment north of Pyongyang, near Sunchŏn. It was October 1950. The Korean War was raging. 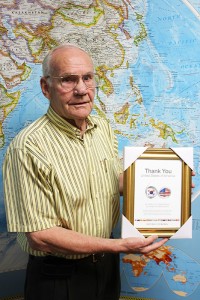 Paul Overgaard, who was raised on a farm near Lerdal and attended a one-room schoolhouse for eight years before going to Albert Lea High School, holds a certificate of appreciation from the Republic of Korea. Recently, he also received a medal for serving as an Army officer in the Korean War. –Tim Engstrom/Albert Lea Tribune

Two days later, the headquarters unit he was with was positioned behind brigade forces up the road to meet a Korean unit. Many of the soldiers had never seen combat and were sleeping soundly. Troopers came marching along, and finally a commander sent someone out who could speak Korean to see whether they were friend or foe. An answer wasn’t found, and the troops went about their business.

The answer soon came as they spread out into the rice paddies and began shooting at the Americans.

“We met up with a Korean unit. It just wasn’t South Korean,” he said in telling the story.

Overgaard, an assistant platoon leader, ran around waking up soldiers, and as he dived toward his hole, he was shot in the left thigh.

He laid there through mid-morning. The wound was painful, but not life-threatening.

An Australian tank unit moved through chasing out the remaining communist soldiers. Overgaard was flown by helicopter to a Mobile Army Surgical Hospital, then transported by train to a harbor, where he spent six weeks on a medical ship.

Overgaard revisited Korea — the southern portion, to be sure — for five days last month. He visited with his wife, Jan. The South Korean government paid for their five-star hotel and food. It paid for half of his airfare and a third of hers.

He was among 50 soldiers from the United States who made the trip that week. Soldiers were there from 15 countries. It happened to be the 60th anniversary of the armistice signing.

As part of the visit, they went to the abandoned village of Panmunjom in the demilitarized zone between North and South Korea. The buildings there are where the 1953 armistice was signed and where discussions between the two nations still take place from time to time. Soldiers from both countries guard the buildings, staying on their respective sides of the demarcation line.

Overgaard said they stand for four hours without moving.

The Korean War began in June 1950 and the fighting stopped in July 1953. Overgaard served in Korea from September 1950 to May 1951. He made a second combat jump southwest of Seoul in February 1951. His airborne unit was part of the Eighth Army, commanded first by Gen. Walton Walker and then Gen. Matthew Ridgway, whom Overgaard credited with turning the morale of the Eighth Army around and turning the tide of the war effort.

The trip gave Overgaard a few points to consider.

He said members of the two Koreas despise each other greatly, even though they are the same ethnicity. He said it is “disappointing to see man’s inhumanity to man so quickly come to the forefront.”

What’s rewarding, though, is how South Korea has taken advantage of its freedom. He said the south used to be the agrarian part of the country, and the north was industrial. South Korea is now a modern, industrialized nation with a sizeable economy and a leader in the free world. He was reassured in how the people of South Korea showed gratitude toward the war veterans.

• After World War II, the United Nations arranged for the Soviet Union to administer north of the 38th parallel, and the United States south of it. Cold War politics prevented the creation of a single government, and in 1948, the two governments were formed, the north communist and the south democratic.

• Kim Il Sung was made leader of the north. He is the grandfather of present-day leader Kim Jong Un.

• Syngman Rhee became the elected leader in the south. He served autocratically until ousted in 1960. Dictators ruled until the late 1980s, when South Korea formed itself into a modern democracy.

• The Soviet-backed north invaded the south on June 25, 1950. The United Nations responded in two weeks, with 16 nations sending combat support.

• The communist forces nearly swept the Korean and American forces off the peninsula in August 1950, but the allies hung on near Pusan. By October, U.N. forces had nearly pushed the North Koreans to the Chinese border at the Yalu River. China entered the war, pushing the U.N. forces south of Seoul. By July 1951, the U.N. forces had recaptured Seoul and a stalemate formed along the present demilitarized zone. A cease-fire armistice was signed in 1953, but the war technically still is going on.

• There are 24 million people living in North Korea, and 50 million in South Korea.

• The North Korean economy collapsed in the mid-1990s as 1 to 3 million people died from famine.

• Average life expectancy in North Korea is 69, while in South Korea it is 79.