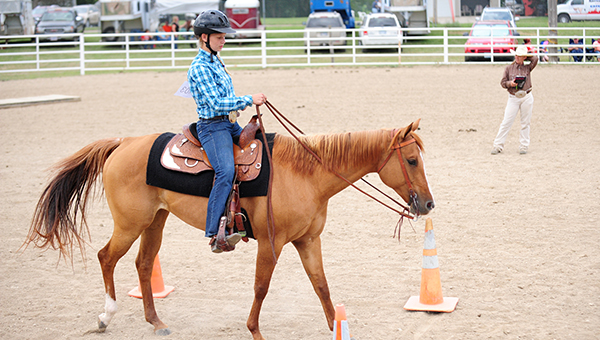 Missy Malakowsky rides her horse Winnie through the trail portion of the horse show on Tuesday at the Freeborn County Fair. Malakowsky will be showing her horse at the Minnesota State Fair in September. –Brandi Hagen/Albert Lea Tribune

While many kids look forward to summer and the Freeborn County Fair as a way to relax and have fun with their friends, some enjoy the fair in quite the opposite way — by doing a lot of work.

Missy Malakowsky, for example, is the 16-year-old daughter of Forrest and Sharon Malakowsky of Hartland. She is at the fair from about 7 or 8 a.m. until about 9 p.m. each day.

The reason being is she’s a 4-H and FFA member and participates in several animal shows.

This year Malakowsky brought goats, horses, dogs, rabbits and poultry to show. In the past she has shown llamas, but because her schedule was already packed, she had to pass on them this year. Her younger brother, Jason, however, brought the llamas to show.

About the only way Malakowsky can keep her schedule straight is to keep it on a calendar on a cellphone she keeps tucked in the pocket of her jeans, but she likes it that way. 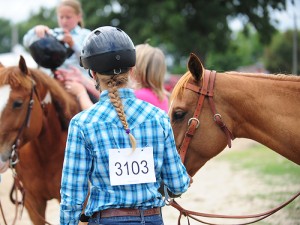 Missy Malakowsky stands with her horse Winnie Tuesday waiting to be called into the arena.

“Otherwise I’d get bored,” Malakowsky said. “I like to be doing something.”

And even though she tries to plan out her day ahead of time, it still isn’t easy.

Malakowsky said because she does show so many animals, sometimes the shows overlap. Like on Tuesday when she was showing her horse, the rabbit show started in another area. Fortunately, organizers rearranged the class lineup and made it possible for Malakowsky to participate in both shows.

Malakowsky is a member of the Hartland 4-H and has been since either kindergarten or first grade. She got involved because her older sister Heather was doing it and also because her family raises animals. The family has three dogs, three horses, three llamas, four beef cows, about 20 goats and several chickens and ducks.

As her junior year at New Richland-Hartland-Ellendale-Geneva High School is about to start, Malakowsky looks back on how far she’s come.

Her view on showing animals and being involved in the agriculture programs has changed over time. 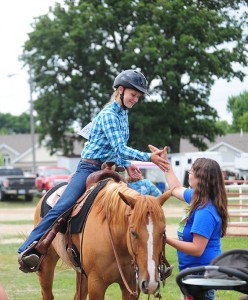 Missy Malakowsky of Hartland does a handshake with her friend Haylie Mosher of New Richland from atop her horse.

“At first, it wasn’t so much fun,” Malakowsky said. “It was just a lot of work. But then I realized if you put more work into it you do better. And, I like working with the animals.”

With chores to do every day and animals to work with, Malakowsky said she is thankful for her family who pitches in to help when needed.

Malakowsky said it has also been fun meeting new people with similar interests at shows and conventions.

She especially likes that the people she meets are willing to help each other out whether it be a serious or silly situation.

Malakowsky said, for example, she was at a show and her hat didn’t really fit. The people she was with tried loaning her a hat, but it wasn’t the right size either. One of them came up with a solution of stuffing toilet paper into her own hat to make it fit for the time being.

As of Thursday morning, Malakowsky guessed she had earned about 10 blue ribbons at this year’s fair.

“I like seeing my hard work pay off,” she said.

In addition to her ribbons, Malakowsky won a trip to the Minnesota State Fair in September with her horses and her dog, Bindi. Following the results of a show on Thursday night, Malakowsky hopes to also take a goat.

She said a state fair trip is not new to her. She has been going since about the sixth grade.

No matter what happens at the state fair, or at any show, Malakowsky said she just wants to walk away knowing she’s done her best.

When she’s at the shows she said sometimes she gets nervous during judging, but not like she used to. Now she welcomes constructive criticism because she knows it will help her improve what she works so hard at. She’s also learned to not sit around and worry about how she’s going to do.

“It’s better to just relax,” Malakowsky said. “If you worry, you overdo it.”

“It’s fun to see what other people do and what works for them,” Malakowsky said.

For Malakowsky, being involved in 4-H and FFA and winning ribbons and trips to state haven’t been the only rewards. Being involved in the programs has taught her to work hard and manage her time. And, even though she’s still in high school, it has encouraged her to look into future career paths.

Malakowsky said she used to want to be a veterinarian, but the thought of going to school for another eight years is not appealing. Still, she is pretty sure she will follow an agricultural path.

In addition to her agricultural hobbies, Malakowsky is involved in cross country and marching and concert band.