Looney at the fair 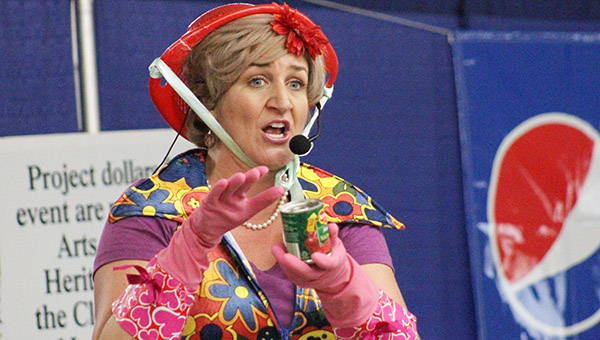 Fairgoers seeking silly, family-friendly fun have just the right place to visit this year during the Freeborn County Fair. 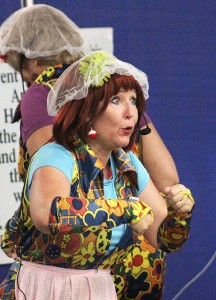 The Looney Lutherans, made up of three professional actresses from the Twin Cities area, performed at the Fairlane Building on Wednesday and will performing again at 11 a.m., 2 p.m. and 4 p.m. Friday.

The show incorporates music, comedy and audience participation to share the story of three Lutheran women who are on the road presenting a guide to healthy living — the Lutheran way.

“I think our goal is always for people to have fun,” said one of the women, Dorian Chalmers, who plays the role of Ginger Johnson.

And that they did. 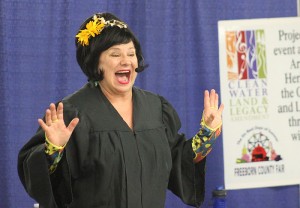 Chalmers and Greta Grosch, playing Lois Jenson, and Robbi Mancina, playing Bella Anderson, on Wednesday presented the Lutheran food wheel, which revolved around a hot dish. They also presented potato recipes and beauty tips using supplies from your own kitchen and hosted a game show with audience members to see what they had learned. Whichever team won the most questions had a chance to win five cans of corn.

“It was wonderful,” said Barb Davis of Delano. “Just the goofiness, it’s nice to have the clean fun.”

Davis said she admired the three women for their willingness to “act silly.” 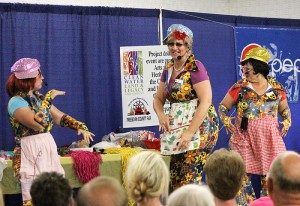 The Looney Lutherans dance Wednesday during one of their shows at the Freeborn County Fair. — Sarah Stultz/Albert Lea Tribune

The Looney Lutherans originated in 2006, Grosch said. The three women were performing the “Church Basement Ladies” at the Plymouth Playhouse and wanted to go on the road to perform. They now take their show across the country to various county fairs, mother and daughter banquets and senior expos.

“We love doing these kinds of events,” Grosch said. “What we do is silly, but it’s audience interactive, and people like to be involved.”

She said each show they put on is a little different, so if you go to more than one show, you will be seeing different performances each time.

The show is being funded through the Arts and Cultural Heritage Fund of the Clean Water, Land and Legacy Amendment through a partnership with the Minnesota Department of Agriculture.