Linda Crom, Kim Jorgenson and Kris Johnson, all of the Hartland 4-H Club, were excited that the fair board had the 4-H Building painted before the start of the fair this year, but they just thought something was missing.

Crom then asked Jody Larson, an engineer at Lou-Rich, if he would be able to help make some signs. Even though it was short notice, Larson said he definitely wanted to help. On his lunch break the week before the fair, he designed a few shamrock signs and one larger square 4-H sign to be cut by the company’s laser cutter. 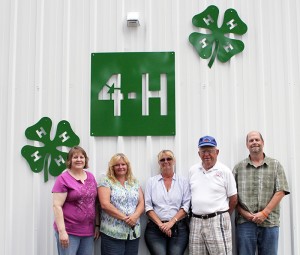 “We got it cut on Friday, and put it through the paint line on Monday,” Larson said.

Then he delivered them to the fairgrounds so they could be hung up. Fair Manager Norm Fredin said he was thankful for the donation.

“We couldn’t survive without businesses supporting the fair,” Fredin said.

Fredin said the fair received a paint donation from the Southern Minnesota Initiative Foundation and then hired painters to paint the 4-H Building. The Hartland 4-H members thought the building looked nice with the new paint job, but that it could use more signage to show people what building it is.

Larson said the signs probably cost a few hundred dollars once you factor in the labor, steel and powder-coat paint. He said the company was in favor of helping out with the donation.

“We try to be a good community partner,” Larson said.