Funeral services for Mildred F. Wing will be at 11 a.m. Thursday at First Lutheran Church, Albert Lea. The Rev. John Holt will officiate. Visitation will be held one hour prior to the service at the church. Burial will be at Oaklawn Cemetery, Northfield, at a later date. 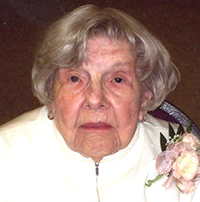 Mildred was born on May 26, 1914, to Gustave and Ida (Homann) Helle. She grew up on a farm near Otsego, Wis. She graduated from Rio High School in Wisconsin. Upon graduation, Mildred attended secreterial school in Milwaukee, Wis., where she would eventually meet her husband, Julian Wing. The couple exchanged their wedding vows on June 4, 1935, in Bismarck, N.D. She later obtained her college degree in education from Mankato State University in 1958. Shortly after graduation, she began teaching at Emmons grade school, and continued to do so until her retirement in 1979.

Mildred was a long-time, active member of First Lutheran Church in Albert Lea. She was involved in various church circles. Other organizations she belonged to were AAUW as well as Tuesday Literary Group. In her free time, Mildred enjoyed playing cards with her family members and playing dominos with friends. Education was always a part of her life. She gained enjoyment and satisfaction out of reading and was always eager to learn.

Mildred was a very organized, strong-willed person. She was the type of person who always took charge in any situation. She was a very independent and caring woman, who was the caretaker for her husband for more than 10 years. Mildred was always willing to listen and was even more willing to give advice. She enjoyed taking trips to Arizona to visit her sister. Most of all, she loved her family, especially seeing the smiling faces of her 13 great-grandchildren.

Those who are preceded in death include her parents; husband, Julian Wing, and sister, Helen Helle.