Nighttime at the Relay 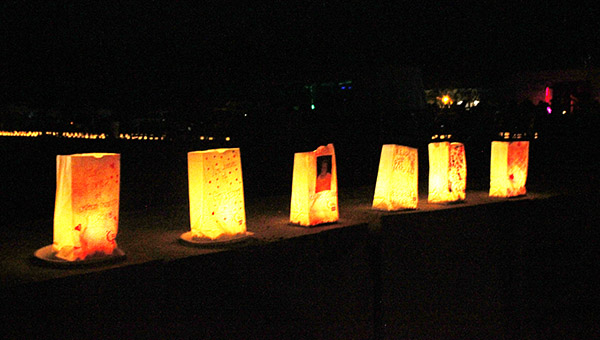 Luminarias line the track at the Relay for Life on Friday night. — Erin Murtaugh/Albert Lea Tribune

A festive mood arises in the middle of darkness

A woman kneeled to snap a photo with her cellphone of a luminaria at the Freeborn County Relay for Life. It was about 1:30 a.m. Saturday.

Mona Hobbiebrunken, 60, said she enjoys being awake at night. She was walking the track from 11 p.m. to 3 a.m. 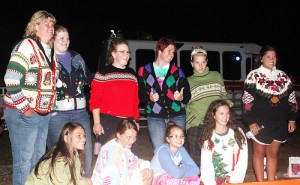 Participants of the 3 o’clock hour dress up time pose for a photo for Relay for Life workers. The theme of the hour was ugly sweaters. — Erin Murtaugh/Albert Lea Tribune

The Freeborn County Relay for Life goes from 6 p.m. Friday to 6 a.m. Saturday. While the somber tone of battling cancer remains, the event is a different place in the middle of the night than it was when ceremonies kicked off.

Some teams at the Relay for Life manage to keep a person walking the track at all times. Other teams just stay up late and get up early. Some go home early and don’t come back. And some just stay up all night long.

Hobbiebrunken said she took the photos of a luminaria made for grandmother Harriet Madson to send to her brother and sister in Texas. She said she walks for her grandmother, grandfather, an uncle, two co-workers and a good friend.

She described the night weather as “beautiful.” At 1 a.m., it was 55 degrees and calm. The stars were visible, and the Ursa Major hung above the north horizon. 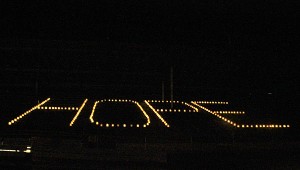 There were three ways people were managing to stay awake: walk the track, participate in activities near the stage or socialize around a campfire.

Near the stage, about 40 girls and women and perhaps two or three from the opposite gender were participating in Zumba, a form of dance exercise. The pulsing music could be heard through the Freeborn County Fairgrounds. Meanwhile, pirates were circling.

About a dozen girls and one or two women dressed up as pirates as part of the theme for the 1 o’clock hour. They were ready to be judged and were having middle-of-the-night laughs at this reporter’s expense.

“They all get a little punchy this time of night,” said Sandy Tomschin, 48, captain of Knights for a Cure, a team from Alden that went all out for the costume themes.

Her daughter, Kelly Tomschin, 22, dressed as a pirate, but was geared up for the 4 o’clock theme of celebrities. She wore a sparkling dress and walked on red carpet while her teammates were either part of her entourage or the paparazzi. 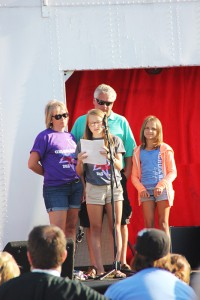 Kayla Koenen, 23, won the pirate contest and a purple American Cancer Society bag with ill-gotten booty. She came complete with a plush parrot on her shoulder named Petey. Missing out on sleep was no big deal. She had stayed up the night before making costumes.

Fourteen-year-old Kailey Christensen, from a different team, won second. She wore a costume that looked like a vampire pirate with a big nose. Several of the others tied for third.

Team Courage was a collection of a dozen family members. One was 41-year-old Jill Johnson, a cancer survivor.

“It’s always nice to be together,” she said.

They chatted about favorite TV shows and Christmas gatherings of the past, among other topics.

Hobbiebrunken, walking stick in hand, particularly liked the angel display on the east side of the track. She enjoyed lingering there when making laps. In the background, on the steps of the Grandstand, were luminarias arranged as capital letters to spell “hope.”

“I think that’s why I walk at night,” she said.