‘One hurdle after the next’ 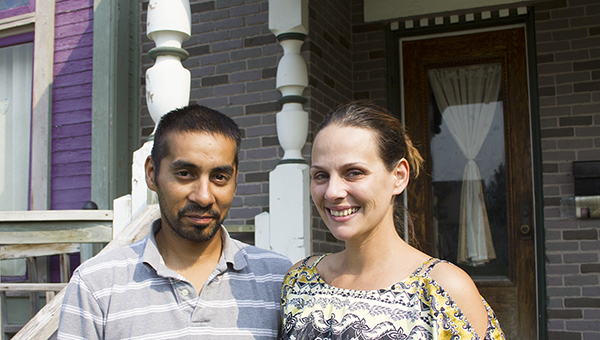 Lennie Aguilera and his fiancee, Julie Cincoski, on Wednesday stand in front of their home, what was formerly known as the Turtle Dove Tea House & Gardens. — Sarah Stultz/Albert Lea Tribune

When Albert Lean Lennie Aguilera and his fiancee, Julie Cincoski, bought the former Turtle Dove Tea House & Gardens in May of 2012, they fulfilled Cincoski’s lifelong dream.

Now, 15 months later, after a job layoff and a brutal assault, the family is struggling to keep that dream afloat. 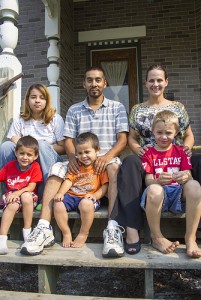 Lennie Aguilera and his fiancee Julie Cincoski sit on their front steps on Wednesday with four of their six children. — Sarah Stultz/Albert Lea Tribune

“We’re month-by-month right now,” said Cincoski, who together with Aguilera, has six children. “It’s one hurdle after the next.”

Big plans for a community landmark

Aguilera and Cincoski bought the Victorian house, at 510 W. Main St., on May 25, 2012, through a contract for deed under Cincoski’s name from Turtle Dove owner Gwen Reiss of Ellendale. Reiss had owned the house since 1996 and the next year had opened up her business, known for its murder mystery dinners and tea parties.

The Turtle Dove closed in 2008 because of the economy, Reiss told the Tribune in a previous interview. It had been empty for four years before the family moved in.

The house, which was built in 1880, was originally just south of where it stands now but was moved in the 1930s when the city extended Main Street and drained Spring Lake (now Morin Park) into Fountain Lake.

Cincoski and Aguilera said they had big plans for the house, which has five bedrooms. They said they were making plenty of money at the time to afford all of the payments and even some extras.

They began with renovations to the bathroom to add a tub and shower, and they took off some of the wallpaper to repair walls. They also worked on the landscaping.

All their efforts, however, slowed down when Aguilera, an Army Reserves veteran, got laid off as a foreman with Osmose Utilities Services Inc. in January.

He was unemployed through the second week in March, rehired briefly, was laid off again for another two or three weeks and then went back to work the first week in April.

“It’s only for a couple months, but it hits hard,” said Aguilera, who inspects utility poles.

Sometimes she worked 12- to 14-hour days for six or seven days a week, he said. Her hard work paid off, and she was promoted two months ago to an event coordinator.

“She’s really what held us all together,” he said.

About a month after Aguilera went back to work, he and Cincoski had some of their family and friends over to their home, he said.

They had a couple of drinks, and one of their guests wanted to go out to the Nasty Habit bar just a few blocks up William Street. 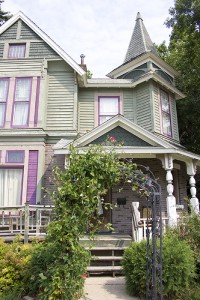 Aguilera said he suggested they go to Harold’s Bar instead, but ultimately, they went to the Nasty Habit. He went along to make sure nobody got into trouble.

Cincoski said her fiance “happened to be in the wrong place at the wrong time” when he tried to help pull somebody out of a fight outside near the bar and got hit multiple times with what they think were brass knuckles.

The first punch, Aguilera said, was to his left temple.

He also suffered a broken jaw bone in three spots and a cracked cheekbone and eye socket. Several fillings on one side of his mouth were also broken out.

“I was told I couldn’t even sneeze or blow my nose because I could literally pop my eyeball out of my socket because of what was done,” he said.

The cost of the corrective surgery itself was donated, but Cincoski said they have an estimated $31,000 in medical bills. Aguilera had just started up his job a few weeks earlier and did not have insurance at the time.

He now has three titanium plates in his face, one near his temple, one underneath his eye and one on the left side of his nose.

“The doctors said people have died from hits that were less than that,” he said.

The assault left him out of work for 2 1/2 months and having to drive to Rochester for appointments and paying for prescription medications.

Carlson said there were no witnesses willing to talk right after the assault. As for suspects, police are following up on a suggestion from Aguilera, along with a few other names they know. The case remains under investigation.

Carlson indicated Aguilera was intoxicated, but he declined to say the blood-alcohol level.

Dealing with the bills

Aguilera said he has applied for emergency medical assistance to help cover some of his medical bills, but he has not heard a response.

The couple has been working with Reiss, who they said has been “wonderful” and allowed them to make some late payments.

On top of the bills that are stacking up, however, some parts in the house itself have also needed repairs.

Their furnace caught fire in the winter, and this past week, a pipe burst in the upper floor of the house, leaving behind water damage through the main level.

“Julie wanted this house for many, many years,” Aguilera said. “At all costs, we’re trying to make it be what she wants. It’s just getting to the point where we’ve already talked a few times about trying to find buyers for it to get out from under the stress.”