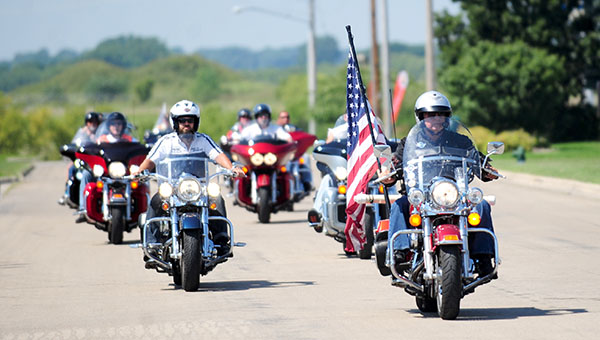 An American flag is escorted to Bergdale Harley-Davidson on Monday by the Wild Prairie Harley Owner’s Group out of Eden Prairie for the 2013 Nation of Patriots Tour. –Brandi Hagen/Albert Lea Tribune

In near-100-degree weather Monday, 11 motorcyclists led by Boyd Uppman, the road captain of the Wild Prairie Harley Owners Group chapter in Eden Prairie, escorted an American flag into Albert Lea for the 2013 Nation of Patriots Tour.

“It’s part of our responsibility as motorcyclists, citizens and veterans,” Uppman said.

This is the fourth year that the flag has been brought into Albert Lea and displayed for a day before being carried on through the rest of the 100-day tour. 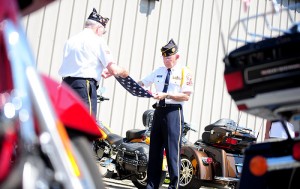 Bill Goette, left, and Dave Olson, of the American Legion Post 56, fold an American flag on Monday at Bergdale Harley Davidson. The flag, which is being escorted on the Nation of Patriots Tour, was put on display for the day before it was escorted by the Albert Lea Harley Owners Group to Waukon, Iowa.

When the flag arrived in Albert Lea on Monday afternoon, there was a formal presentation in which the Flag Bearer’s Rite was read and the flag was passed on from the Wild Prairie HOG chapter to Bryce Haugland, a member of the Albert Lea HOG chapter. Before the presentation, though, a couple from Beaver Dam, Wis., spoke briefly about being back in Albert Lea and on the tour.

Greg and Barb Gassen lost their son, Pfc. Jacob Gassen, on Nov. 29, 2010, 10 days after his 21st birthday while he was stationed in Afghanistan.

Gassen was a medic for the 101st Airborne Division.

While many riders on the tour ride just one leg of the tour, the Gassen’s have stuck with the ride longer. This year they rode to Eden Prairie, then to Albert Lea and on Tuesday left with the Albert Lea HOG chapter to deliver the flag to Waukon, Iowa, which will be their last stop on the tour before they return home to welcome the flag back to its final destination on Labor Day.

“Jake joined the military not to hurt people but to help people,” Barb said. “That was his mission.”

To the Gassens, riding in the Nation of Patriots Tour is a little like what their son was doing. Even though they are not overseas physically helping the wounded, they ride to raise money to help those back home.

“We’re carrying on his mission,” Barb said. “He will always ride with us.”

Greg said there is no time limit on grieving, but he and his wife joined the ride three years ago and continue to do so because they realized they need to celebrate Jacob’s life, too.

In 2012, the first leg of the tour was dedicated to Jacob and, according to Haugland, the Gassens, who carried the flag for the first three days of the tour, showed up in Albert Lea unexpectedly and shared their story with the crowd. 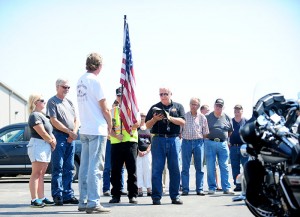 Boyd Uppman, center, reads the Flag Bearer’s Rite to Bryce Haugland, in white, on Monday at Bergdale Harley-Davidson. Watching on left is Barb and Greg Gassen, the parents of Pfc. Jacob Gassen, a soldier from Beaver Dam, Wis. In 2012, the first leg of the tour was dedicated in memory of the fallen Army private.

“You could have heard a pin drop in that building,” Haugland said.

After Monday’s presentation from Uppman to Haugland, Bill Goette and Dave Olson of the American Legion Post 56, folded up the flag which was then placed on display inside of Bergdale Harley-Davidson for the rest of the day.

With 67 riders and about 57 bikes, this year’s ride left Albert Lea at 9:30 a.m. Tuesday to escort the flag the 125 miles to Waukon. On the way to Waukon, the motorcyclists passed through Austin, Spring Valley, Preston and Cresco, Iowa.

Haugland said there was great response along the route. In some towns the group had a police escort and there were people with flags waving from the road as the bikers went by.

“When you get 57 bikes, it’s a parade just about,” Haugland said.

The 2013 tour began in Oconomowac, Wis., on May 25 and will return to Oconomowac on Labor Day. By the end of the tour, the flag will have traveled through 48 states to honor America’s armed forces and their families and to raise money for wounded veterans.

According to Haugland, more than 50 bikes left Albert Lea last year with about 65 riders.

In southern Minnesota alone, the 2012 tour raised $1,575, which was donated to Ronnie Moats, a La Crescent soldier whose vehicle had been blown up by a roadside bomb while conducting bomb-sweeping missions.

Other funds raised on the 2012 Nation of Patriots Tour were donated to 11 wounded veterans in Iowa, Louisiana and South Dakota. 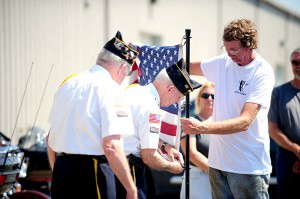 Bryce Haugland, right, holds a flagpole while Dave Olson of the American Legion Post 56 unclips the flag so it could be folded and placed on display at Bergdale Harley-Davidson on Monday.

Haugland said the veteran who will benefit from this year’s southern Minnesota funds has yet to be chosen. He hopes the check can once again be presented to the recipient on Veterans Day. By rough estimate Haugland said about 30 percent more funds were raised this year over last year and there is still money coming in. Anyone wishing to still make a donation can do so at Bergdale Harley-Davidson.

For more information or to see photos from past tours visit the Nation of Patriots Tour website at www.nationofpatriots.org.

Rider, it is with great honor that I present to you the flag of the United States of America. You have volunteered to take her into your responsibility until your designated course brings you to the next Patriot that will accept the same duty and relieve you of yours.

Upon taking this flag, you swear to do so with the greatest respect as you are also accepting all that she represents. You will accept her past, present and future. You will proudly recognize the many that have stood to defend her. You will humbly remember the many have fallen in their valiant service to her. You accept and carry with you our nation’s collective dignity, pride and pain.

Do you rider accept this flag, this mission and this responsibility?

Then ride now for honor, for country and for our armed forces. The very heart of our beloved nation travels with you. Godspeed, flag bearer.