Update: Arrest made in Northwood stabbing 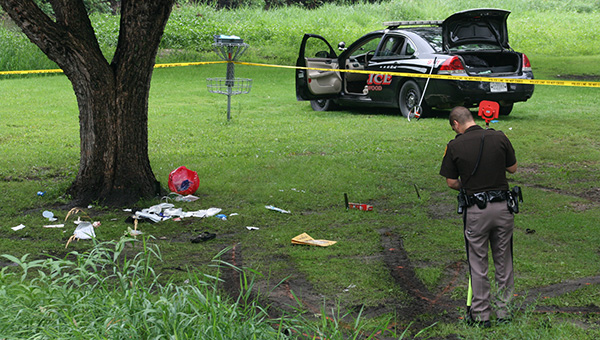 An Iowa State Patrol officer looks at the scene of a stabbing at Swensrud Park in Northwood Monday afternoon. — Sarah Stultz/Albert Lea Tribune

Suspect is in custody

NORTHWOOD — Authorities are investigating a stabbing Monday morning at Swensrud Park in Northwood.

A Worth County Sheriff’s Office news release sent out at about 4:30 p.m. Monday stated an arrest has been made and there is no further threat to the public. However, the Iowa State Patrol stopped short of connecting the arrested man to the stabbing.

The State Patrol arrested 39-year-old Tyrone R. Washington of Mason City at 3:47 p.m. Monday, after a high-speed chase near Davenport, Iowa, south of Interstate 80 and west of Interstate 280. The Iowa State Patrol stated Washington is being investigated by the Division of Criminal Investigation for criminal activity in Worth County, but it has not confirmed he is tied to the Northwood stabbing. 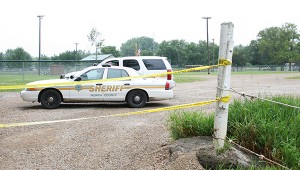 Police tape marks off one of the entrances to Swensrud Park Monday afternoon as two Worth County Sheriff’s Office deputies talk near their cars. — Sarah Stultz/Albert Lea Tribune

The State Patrol report indicated Washington was driving a 2003 Pontiac Grand Prix and was attempting to elude law enforcement when police intervened to stop the car, and he was arrested without injury. He is being held in the Scott County jail and is facing charges there for eluding police, speeding and intrastate detainer. An intrastate detainer is a hold placed on an inmate by another county in the same state.

The Worth County Sheriff’s Office has not released any additional information, and the Division of Criminal Investigation is expected to issue a press release at 10 a.m. today.

Police were alerted to the stabbing in Swensrud Park after 11 a.m. Monday. No information about the victim or the extent of injuries has been released.

Officers with the Northwood Police Department, Worth County Sheriff’s Office and Iowa State Patrol were at the park Monday afternoon looking at evidence and taking photographs. The park was blocked off from several entrances.

Within the park, a separate area was marked off on the northeast corner close to where the Shell Rock River turns and heads west, and multiple items were strewn about the grass near one tree. There were also several muddy tire tracks nearby.

This is the second stabbing in Northwood in two months.