The 94-year-old woman firefighters rescued Wednesday from a smoke-filled house on the west side of Albert Lea has died of carbon monoxide poisoning.

Helen Modderman passed away at 4:30 p.m. Thursday at Hennepin County Medical Center. Albert Lea firefighters were dispatched to 410 Bel Aire Drive shortly after 5 p.m. Wednesday, where they doused the interior fire, pulled her from the home and carried her to a waiting Gold Cross ambulance.

Ambulance personnel resuscitated her before delivering to Mayo Clinic Health System in Albert Lea. She was airlifted to Hennepin County Medical Center in downtown Minneapolis, where she spent time in a hyperbaric chamber while in the intensive care unit. Hyperbaric chambers provide pure oxygen to patients, and increase the amount of oxygen in a body’s tissue. 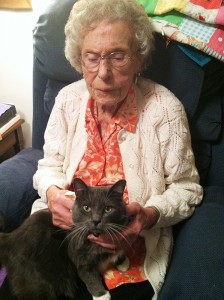 Helen Modderman sits with a cat she grew to like, even though she previously never liked cats. — Submitted

Investigators haven’t stated a cause of the fire, but Modderman’s daughter, Jane Haukoos, said the family believes it was the electrical lift chair or the air conditioner.

Capt. Lee DeVries of the Albert Lea Fire Department said the investigation is ongoing and a determination has not been made. The State Fire Marshal’s Office is involved.

Jane said her mother’s lungs improved with the medical treatment but she never regained consciousness. She praised the police, fire and medical staff for their work.

Modderman is survived by her only child, Jane, and Jane’s husband, Steve, who live in Alden. Steve called dispatchers about the smoke when he had stopped to check on Helen. Jane and Steve have two grown children, Gina, 23, and Heather, 27.

A cat living in the home survived the fire, and Jane and Gina shared a story about the feline that Helen warmed up to.

“My mom hated cats. There was never a like for cats ever,” Jane said.

Gina had a cat, a blue Russian named Persnickety, when she was in college. Last fall, Gina moved in with her grandmother to be a caretaker and kept the cat locked in the basement while she was away being a student teacher in Lake Mills.

Finally, Helen called her daughter and said she heard a cat but could not locate one outside. Jane admitted there was a cat living in the basement, and Helen said she did not want that cat. She reluctantly agreed to let it live in the basement.

It wasn’t long before the family discovered while talking over the wireless telephone that Helen was in the basement. Why was she down there? Helen told her daughter that the cat kept crying, so she went down to comfort it. Jane eventually advised her to let the cat come upstairs.

Helen didn’t really like the name Persnickety, so she called it Cat.

When Gina moved out in January, Cat stayed with Helen, and “the two were best buddies,” Jane said.

“She hated cats, but she adopted this one,” she said.

She said the ancient Chinese believed the blue Russian breed — this one even had white paws — had healing properties. In late June, Helen fell. She had a bruise on her arm and needed 15 stitches in her head. The bruise and scar healed faster than the family and caregivers at St. John’s Lutheran Home expected for a 94-year-old.

After that, the family was “all about the healing properties of this cat,” Jane said.

For the past two weeks, a caregiver decided the pet needed a better name and called it Smoky, which Gina said turned out to be quite a coincidence. The cat will go back to living with Gina.

Haukoos said her mother liked watching “Antiques Roadshow” on PBS and listening to the music of singer Danny O’Donnell.

Late August has been an eventful time for the family, Haukoos said.

Arrangements are pending at Bonnerup Funeral Service in Albert Lea.