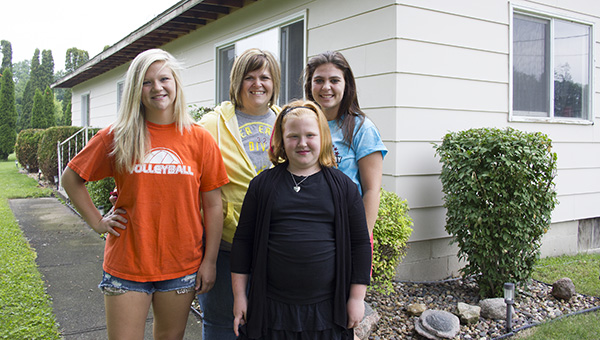 Patti Groe, back middle, stands with her daughters from left, Emily Benson, Maci Benson and Madison Michaelson, in front of their home on Frank Hall Drive. Groe’s family is one of four that will see renovations during this year’s Rocking the Block and other Shinefest service projects. –Sarah Stultz/Albert Lea Tribune

Shinefest is this week in Albert Lea

Volunteers kicked off a week full of service in the community Saturday with renovations at one Albert Lea home.

As part of Rocking the Block and Shinefest week, crews began taking off old shingles on the roof of a garage on Frank Hall Drive belonging to Patti Groe, a mother of three children ages 9, 13 and 17.

Crews will be at three other houses — on St. Joseph Avenue, S.E. Marshall Street and James Avenue — this week as well.

“I’m definitely excited, and I’m so glad,” Groe said. “It’s absolutely amazing how people come together and help other people.”

The housing projects, called Rocking the Block, are made possible through a collaboration with Shinefest, the Albert Hea Housing and Redevelopment Authority, the United Way of Freeborn County and Habitat for Humanity.

Groe said she found out she was selected for the project about three or four months ago. She had applied for a Small Cities Development grant through the HRA, but when the HRA did not receive funding for the program this year, someone told her about the Rocking the Block initiative. The HRA and the United Way selected the families to benefit based on need.

Chuck Avery, project manager of the Frank Hall Drive renovations, said volunteers will be shingling the family’s unattached garage, tearing off gutters and replacing soffit and facia, painting the side of the house and installing a few new windows on the southwest corner of the house.

They are trying to resolve a mold problem that Groe has been facing inside the house.

Avery said the projects are made possible through several donations from area businesses in the community, along with volunteers who are donating labor.

In addition to the housing projects, there are a half dozen other projects taking place this week for Shinefest.

“It’s very fulfilling,” said organizer Jim Troe. “To show the love of Christ in practical ways is easy for people to understand.”

This past Saturday, there was a Community Sew Day at the Senior Center at Skyline Plaza, where community members were invited to bring their sewing machines to make quilts that will be given out at a neighborhood picnic on Saturday.

This coming Saturday, there will be a blood drive, a back-to-school shop and a free oil change for families in need at the Freeborn County Fairgrounds.

The blood drive begins at 8:30 a.m. in the Fairlane Building.

The back-to-school shop will include clothes sizes 6 through high school and will run from 9 a.m. to noon.

Oil changes will also be from 9 a.m. to noon at the fairgrounds. The oil changes are free of charge but people must bring their own filter.

The week concludes Saturday with a neighborhood picnic at Frank Hall Park from 4 to 8 p.m.

Troe encouraged people to participate and exercise their talents to help others in need in the community.

• Rocking the Block: All week at four locations across town. Call the United Way of Freeborn County at 373-8670 to sign up to volunteer. 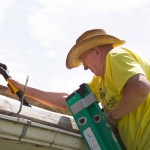 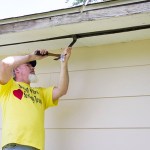 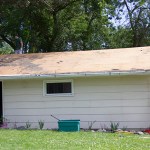 Volunteers work on the home of Patti Groe in Albert Lea on Saturday as part of Rocking the Block. 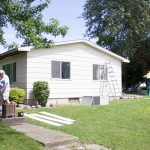 Volunteers work on the home of Patti Groe in Albert Lea on Friday as part of Rocking the Block. 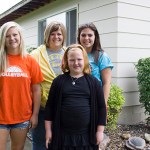 Patti Groe, back middle, stands with her daughters from left, Emily Benson, Maci Benson and Madison Michaelson, in front of their home on Frank Hall Drive. Groe’s family is one of four that will see renovations during this year’s Rocking the Block and other ShineFest service projects. –Sarah Stultz/Albert Lea Tribune