The memorial service for Scott Matthew Barnes will be at 2 p.m. Tuesday at St. Theodore Catholic Church. The Rev. Timothy Reker and Deacon Mike Ellis will officiate. Visitation one hour prior to the service at the church.

Scott Barnes passed away unexpectedly in his sleep on Thursday, Aug. 8, 2013. He was 32 years old. 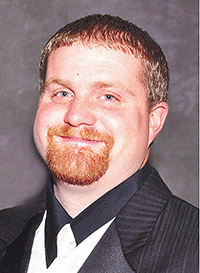 Scott was born on Dec. 26, 1980 in St. Louis Park, and was the son of Jerry and Marilyn (Rutten) Barnes. He lived in several states growing up, including Minnesota, South Dakota and Arizona. He spent time in Redwood Falls and settled in Albert Lea in 1995 and was very proud when he obtained his GED. Scott was united in marriage to Sara Dahmes on April 5, 2008, at the First Presbyterian Church in Albert Lea.

Scott was recently employed with Nelson’s Marketplace where he was working with his father. He was a baseball coach for his sons in Albert Lea and was a fan of Minnesota sports. Scott loved grilling, spending time with his children and nieces and nephews, his family, movies and fishing. He was rough on the outside but on the inside he was a kind-hearted, hard-working, devoted father who played practical jokes.

Scott is preceded in death by his grandfathers, Gillette Barnes and John Rutten, and grandmother, Marcella Rutten.

Even after death Scott is still giving. His choice to be a donor was one that will help many people, and will make a difference in their lives.