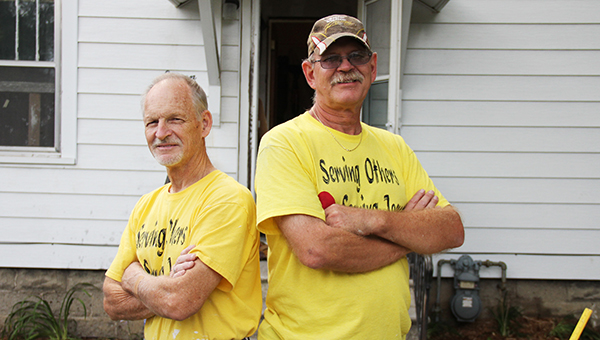 Wayne Applegate, left and Michael Nelson have been volunteering at a home on James Avenue in Albert Lea for Rocking the Block, a collaborative project to fix up homes in the area. –Kelli Lageson/Albert Lea

Two men say that giving back is the main reason they wanted to help with the Rocking the Block project in Albert Lea.

Wayne Applegate and Michael Nelson, along with about 15 other volunteers, are updating a home on James Avenue in Albert Lea. That home and three others are getting updates as part of the Rocking the Block project, a collaborative effort by Shinefest, the Albert Lea Housing and Redevelopment Authority, the United Way of Freeborn County and Habitat for Humanity. 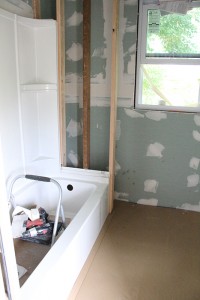 A bathroom remodel is one of the biggest projects at a home on James Avenue in Albert Lea. The project included installing insulation, new flooring and new bathroom fixtures. Volunteers are working on a few projects at four homes in Albert Lea as part of Rocking the Block.

“It really opened our eyes to the need in the community,” Applegate said.

Both men said they had no idea these homes were in this shape before they saw them. The home on James Avenue needed a bathroom remodel, gutter work, landscaping and more. If the work would have been contracted out, it would have cost about $6,000. Because Rocking the Block is a community effort, the materials and labor were all donated. Many Shinefest volunteers, often from area churches, help with all kinds of labor such as painting and yard work.

“A good share of the churches get together,” Applegate said. “That’s what’s nice about it.”

“Something just kept bringing me back to this,” Nelson said. “I see people who can’t do it themselves, and I just want to help.”

Applegate agreed and said he has needed help in the past from neighbors, and Rocking the Block is just another form of that. 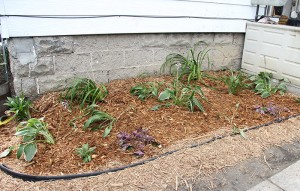 Landscaping was updated at a home on James Avenue as part of the Rocking the Block initiative.

“It’s kind of a way of giving back,” Applegate said.

Applegate is retired and had worked in construction during his career. Nelson works as a truck driver for the Albert Lea School District and has worked on handiwork projects. Nelson said he enjoys the challenges the projects bring.

Both gave credit to the city of Albert Lea for quickly helping with all kinds of inspections throughout the week. They appreciated assistance from volunteers who came to work on the house after they were done with their day job.

“They helped us out so we could go to the next step,” Applegate said.

They started working on Saturday and intend to finish by Friday, but there might be some painting and trim work to finish Saturday. Applegate and Nelson hope they can attend the neighborhood picnic that starts at 4 p.m. Saturday. It’s open to the public and includes family games, a hog roast and a worship service.