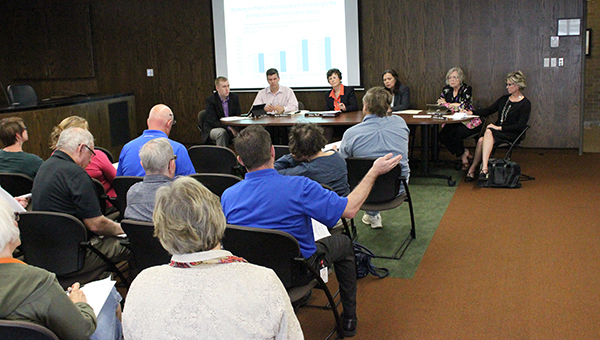 Members of the Minnesota House Select Committee on Living Wage Jobs hears from a businessman who was concerned about job applicants lacking soft skills — such as interpersonal communication. –Tim Engstrom/Albert Lea Tribune

A St. Paul-style debate about how to improve the state economy momentarily spilled into a forum on jobs Thursday in Albert Lea.

One member of the audience said he felt families were missing a stable structure. He said the lawmakers cannot legislate stable families, and he said increasing the minimum wage fails to solve the problem.

Winkler countered that though the jobs picture has improved most of it has come on the end of low-wage, part-time jobs.

“The dynamic of people working hard to make a living and raise a family is eroding,” he said.

She said the state isn’t doing enough to encourage major companies such as 3M and Medtronic to expand in Minnesota, which would create high-paying jobs. She said Minnesota is becoming “more of an outlier.”

“Minimum wage is not supposed to be something to raise a family on,” Kieffer said.

Winkler responded by saying when a third of the economy is paying less than what people can get by on, “then we need to look on the demand side, too.”

He added that Minnesota is not becoming an outlier and doing well for jobs growth. He said the top five states in 2012 were Oregon, Washington state, North Dakota, Texas and Minnesota. He noted that Oregon and Washington have higher minimum wages.

The two then asked for a pardon for dueling it out a little, with Winkler noting that is a taste of what happens at the Capitol.

The committee came to Albert Lea because it sees the city as a “strong regional center for agriculture and jobs,” Winkler said.

The committee wanted feedback from voters as the Legislature considers whether to raise the minimum wage. Efforts to raise it in the 2013 session were unsuccessful.

Real estate agent Bob Donovan threw out a concept that drew responses. He said some companies pay wages that are a drain on state taxpayers. Because they hire part-time workers with low wages, those workers than need food, health care and housing assistance.

“We are subsidizing their employees,” he said.

He asked the lawmakers to give corporations an incentive to pay higher wages. One incentive could be easing the corporate tax rate.

“The ones with low wages, go ahead and tax the heck out of them,” he said.

Some audience members brought up the issue of vocational education.

State Rep. JoAnn Ward, DFL-Woodbury, said vocational education can be costly, but providing it helps with graduation rates and is essential for meeting the needs of a local economy.

“The focus on all kids have to go to college just drives me nuts,” she said.

A businessman raised concerns about job applicants and new hires lacking soft skills — interpersonal communication, problem solving and social intelligence. He said there needs to be more done in school to teach young people soft skills. The panel talked about changes in family structures, too.

Also on the committee was state Rep. Susan Allen, DFL-Minneapolis.

A slideshow from the committee said Minnesota’s economy is recovering faster than the national rate. It said 70 percent of Minnesotans of working age are working or looking for work, compared to 64 percent nationally. The national unemployment rate is 7.8 percent, while Minnesota’s is 5.5 percent.

However, Minnesota household median income is down 9.5 percent over the past 10 years, the slideshow said, and the recovery is unequal across race and gender lines, with whites and males generally better off.

Poverty is increasing in Minnesota. In 2011, more than one in four Minnesotans (1.4 million people) were considered low-income. “This is the highest level in decades,” the slideshow stated.

Many Minnesotans are underemployed, saying 43 percent of workers are educated at the right level for their jobs, with 49 percent over-educated.

The cost of child care drives decisions to not participate in the workforce, the slideshow noted. The numbers rise dramatically with single mothers.