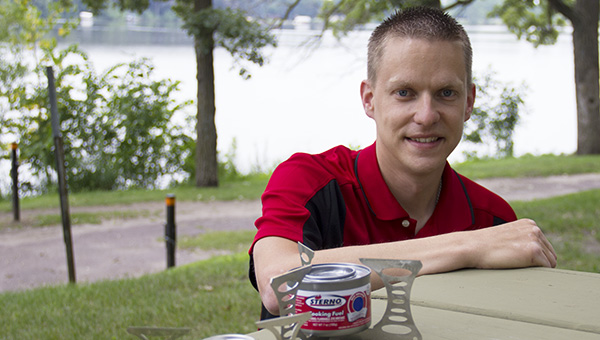 Peter Nelson of Hartland leans on a picnic table July 30 near his two inventions, fold-up camp stoves. The CR1 is in the foreground with an alcohol burner, and the CR2 holds a Sterno can. Fountain Lake is in the background. –Tim Engstrom/Albert Lea Tribune

HARTLAND — A Hartland man believes he has built a better camp stove.

Peter Nelson, 31, likes to build his own hiking gear for when he goes to wild places such as the Boundary Waters Canoe Area. For instance, he makes his own canoe paddles.

In an effort to lighten his pack, Nelson has created a camp stove that weighs 0.8 ounces and folds up into a pocket. He is seeking $6,000 in funds at the venture capital website KickStarter.com, and so far has $1,647 pledged toward his startup. If he doesn’t get $6,000 by Friday, he doesn’t get any of it.

“It’s all or nothing,” Nelson said.

He calls his invention the Critter, or CR1. It works well with an alcohol-burning fuel source made from a pop can. It opens up at 8 1/2 inches, but he has refined it to be 7 inches wide.

He has a CR2 that is taller and weighs 1.85 ounces and folds up snugly. It works well with a standard can of Sterno fuel. That one, however, isn’t on KickStarter.com.

Nelson, manager of strategic planning and development at Streater Inc. — i.e.: a jack of all trades — is a father and a husband. His wife of nine years is Sarah, and they have a son, Jacob, 7, and a daughter, Grace, 5.

In late September, he takes a week off from his life in Albert Lea once a year goes to the Boundary Waters with his father, Tim, of Glenville, brother, Mike, of Mazeppa, and cousin Gabe, of the Twin Cities. 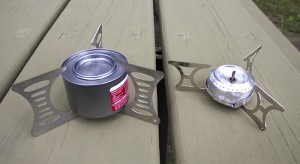 The CR1 is on the right, and the CR2 is on the left. Peter Nelson is hoping to get funds to make and market his invention through the website KickStarter.com. 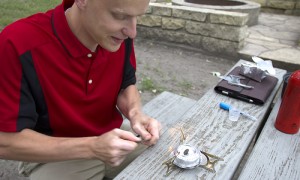 Peter Nelson lights his alcohol-burning camp stove with flint July 30 in an interview at Edgewater Park in Albert Lea.

“I call it my one week of sanity,” Nelson said.

It’s also a time when the weather can be gorgeous or wintry. He called it “playing Russian roulette with the weather.”

But die-hard hikers, he said, like to go in September because there are fewer people and the ones there have more respect for the beauty of the wilderness. He begins planning for the next trip shortly after he arrives back in Hartland.

Nelson has been making his own gear for four years. He decided to make a camp stove for three reasons:

• He has pride in making something.

• He’s not a careful person, and many stoves on the market have too many little parts.

• He said many camp stoves have a high center of gravity and can tip too easily. He wanted one lower and lighter.

Nelson carries his fuel separately from the modified pop can he uses for a burner with the CR1. He burns denatured alcohol, which he said is environmentally friendly because it evaporates if spilled. The burner has no small parts, and, he said, an ounce burns 12 1/2 minutes. The burner holds 2 ounces.

For the CR2, the Sterno can burns a gel mixture that lasts two hours and 15 minutes. Nelson said he thinks the CR2 has a greater appeal, because most campers don’t build their own burners. 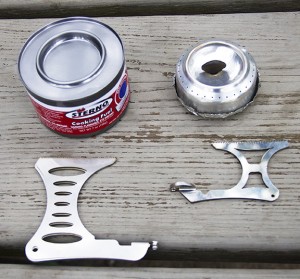 The camp stoves fold neatly into a backpack pocket, and they both hold small burners.

In addition, the CR2, when flipped upside down, can hold a pan over a fire. He said he hasn’t seen any stove on the market that folds up as small as these.

Nelson and his camp buddies don’t eat lightly in the wilderness. They are willing to carry extra weight to make spaghetti, chili and even cakes, in addition to eating the fish they catch. That means hauling tackle.

And he likes to take photos. That means 8 to 15 pounds of fishing gear, 15 to 20 pounds of camera equipment, in addition to clothes, tarp and other gear. Any reduction in weight is a relief, he said.

If Nelson gets the funds, he hopes to afford to pay for an order of them at a local manufacturer and pay for some marketing. People donate at KickStarter.com because they want to see the product reach the market.

He has made 15 of the CR1 and two of the CR2. He is seeking a patent for his invention.

To find Nelson’s creation at KickStarter.com, enter “critter” in the search field.