Studying the true face of grief

I come from a family of entrepreneurs. My parents, grandparents and a smattering of aunts, uncles and cousins have all started businesses that include car dealerships, a bar, construction and concrete companies, tax preparation, a thrift shop and even a tanning salon. 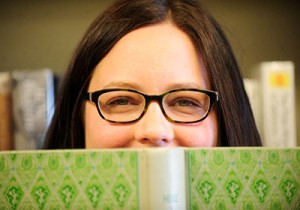 Growing up surrounded by self-employed individuals, owning a business became a normal part of my life. I saw nothing bold or adventurous about starting a business. My family is not full of risk takers. They believe in thorough insurance coverage, sunscreen and card games. My grandfather even bought cemetery plots in his late 40s in bulk because they were a better deal. Just to reiterate, we are descendants of a man who proudly BOGO’d cemetery plots.

I also come from a family of predominately stay-at-home moms, including myself, but a better label might be “stay-at-home entrepreneurs.” These moms have started in-home businesses like childcare, music lessons, foreign language tutoring, photography, confection catering and property management.

The women in my family have found ways to balance both the home and commerce by making a profit from their interests. Whether it be music, baking or design, they get to spend all day surrounded by the people they love while engaging in the activities they love. Rachael Hanel, author of “We’ll Be the Last Ones to Let You Down: Memoirs of a Gravedigger’s Daughter” says “A career brings enjoyment, is closely intertwined with identity; it’s who you are… In a career, you bring your skills and talents to the table, a career allows you to pursue them and use them to make money.” After witnessing three generations of women doing exactly that, I couldn’t agree with Ms. Hanel more. 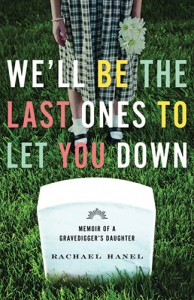 Rachael (Hager) Hanel, born and raised in Waseca, is also familiar with being a part of an entrepreneurial family. Though, as the title of her book suggests, her experience was more interesting. She was the daughter of Digger O’Dell, the local gravedigger, and her parents were the groundskeepers for numerous cemeteries. Death was the family business and Hanel’s childhood was spent riding her bike along gravel paths, sunning herself on granite and reading Dr. Seuss beside floral wreaths. Her writing does two things that make this book worth reading (and recommending):

1. Hanel perfectly explains the difference between death and grief from an insider perspective. Growing up in cemeteries, Hanel became familiar with death and its rituals. Her observations are transposed from her childhood innocence into a nostalgic understanding of her own past.

As part of her father’s business (and as part of life growing up in a small town), she was in constant attendance at wakes and funerals. She calls attention to the staged settings, the costumes and makeup, the intentional lighting and the scripted dialogue of funerals. It is only after tragedy strikes her own home that she asks, “What was the true face of grief?” Hanel isn’t passing judgment on the stoic Midwesterner but trying to understand her own grief within a sociological context.

2. Hanel nails the nuances of growing up in southern Minnesota. Yes, she relies on her own memories, but she includes her family history going back three generations. Hanel’s work as a journalist shows in her research capabilities as she brings the past to life through vivid details.

Her grandfather lost both parents and his newborn brother to influenza within a day of one another. He is raised by his godparents, doing their Christian duty, and forever bares a hunched back and limp caused by picking and carrying large stones from his uncle’s fields before his muscles and bones were fully developed. He was the lucky one though. His siblings went to an orphanage. Just as heartbreaking is Hanel’s telling of her great-grandmother’s struggle of finding burial clothes for her two daughters; she ends up using the one dress that has no practical use — her wedding dress.

Whenever the subject of death is discussed it is usually broached with a gentle, almost hushed reverence that causes people to literally and figuratively step softly. Hanel demystifies death by using this default reaction to make the reader feel like a co-conspirator as she whispers both trade and small town secrets into her pages. While her stories are local and personal, her writing style makes them feel like your own.

Albert Lea resident Angie Barker is an avid reader and has a degree in English literature from MSU-Mankato. Email her at zoller@hotmail.com.