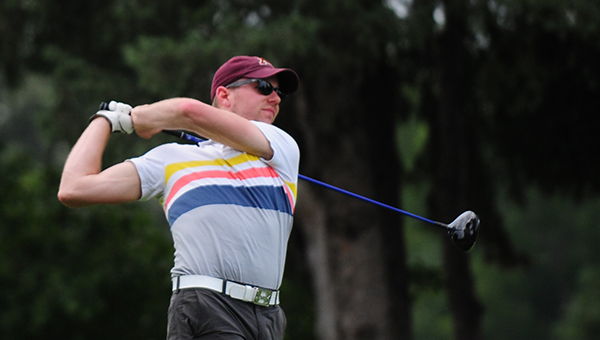 Loch is a co-chairman of the Albert Lea Hockey Association with Scott Thompson.

“It’s all about the kids and raising money to keep hockey the cheapest in the state for Albert Lea,” Loch said. “Our board’s mission is to get the young kids involved.”

Blake Adams, a former player and 2009 graduate of Albert Lea High School, was happy to be part of the event.

“It’s fun and a good way to support Albert Lea hockey,” he said.

Current players also were involved by overseeing challenges and opportunities to donate money throughout the course. High school players Matthew Carlson and Lucas Hacker, oversaw hole No. 13. They agreed the 18-hole best-shot tournament with 36 four-person teams gets them excited for the season.

Among the groups of golfers was Dave Braaten, who participated for the third year. Four of his grandchildren take part in Albert Lea hockey programs.

The Albert Lea Hockey Association planned several events for the fall season, including a 2-and-2 challenge and Albert Lea Youth Hockey Night. Event specifics will be announced when they are determined.