Rich and Bruce Jensen competed together as Smokin Bros BBQ on Friday and Saturday at the 2013 Big Island Bar-B-Que. They’ve won awards at that festival and at others in the area for their ribs, pork, brisket and other specialties. And after they built a mobile food truck for catering and fairs, business has been booming. 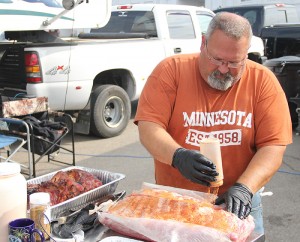 Rich Jensen uses his dry rub on racks of ribs before they are placed in a smoker he and his brother made out of a large LP tank. The brothers were competing at this weekend’s Big Island Bar-B-Que festival. –Kelli Lageson/Albert Lea Tribune

“We do four to five competitions a year,” Rich said. “We’ve done 10 graduations and at least 15 weddings already this year.”

They’ve been cooking every weekend since the second week in April, and they have more big events coming up. One is a customer appreciation event at Treasure Island Resort & Casino near Red Wing. Rich said they’ll be serving 2,000 people and have a whole hog on display. 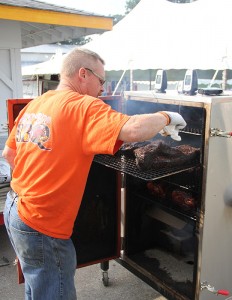 Brothers Bruce, in front, and Rich check on their racks of ribs Saturday at the 2013 Big Island Bar-B-Que event at the Freeborn County Fairgrounds. The brothers operate under the name Smokin Bros BBQ and have catered all kinds of events.

Rich, the operations manager at Albert Lea Select Foods, and Bruce, a truck driver for Sorenson Brothers, have been interested in cooking and barbecue for years. Rich got his first smoker in 2006, then the brothers built a smoker out of a large LP tank in 2008. Rich said he needed to find someone to help him who was just as committed to cooking and who had the same interest.

They started competitions in 2009, and catering jobs have steadily increased over the years. They have a website at www.smokinbros.com where it says they cater events of all sizes.

“This hobby turned into a job,” Bruce said with a laugh.

All of their recipes were found through trial and error, and they don’t like to give away their secrets. They have a homemade dry rub and homemade barbecue sauce, but the meat is no secret. Hormel sponsors Smokin Bros BBQ at competitions. And both Rich and Bruce say that their ribs are their favorite product to eat. Both will experiment with other recipes or new products and call the other to come try it. That’s how turkey tenderloins wrapped in bacon came to be part of the menu at this weekend’s festival. 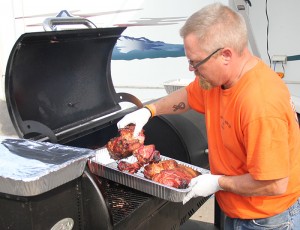 Bruce Jensen empties a smoker to make room for more meat while preparing food for judges and crowds on Saturday at the 2013 Big Island Bar-B-Que.

Smokin Bros BBQ had many entries. On Friday they submitted chili and their homemade barbecue sauce. Then Saturday was the busy day. Rich and Bruce entered every category. The four main meat categories that participants must compete in were: chicken, ribs, beef brisket and pork shoulder. In the “Anything Butt” category they submitted the bacon-wrapped turkey tenderloins and mushrooms stuffed with sausage, cream cheese and a blend of spices. They also had a pecan dessert to submit to the dessert category. On top of all that, they prepared much more food to sell through their vendor truck to the crowds who went to the festival. Freeborn County fairgoers may remember the bright orange food truck from this year’s fair.

They have five smokers, but brought along three to the Big Island Bar-B-Que, which was held at the Freeborn County Fairgrounds. Their largest smoker that they made out of an LP tank can hold 50 racks of ribs or 400 pounds of pork shoulder. About 90 percent of the time they use hickory to smoke their meats, but often they smoke poultry part of the time with cherry wood.

Before the food was ready for the judges, the ribs smoked for about three hours directly in the smoker before Rich and Bruce transferred them to aluminum pans and covered them. Then it was back to the smoker for an hour or an hour and a half. Other meats cooked at various lengths in the smokers, and they kept track of the temperatures of all the meats. Rich said they use their own homemade version of a dry rub, the kind of barbecue popular in Texas. But he knows Upper Midwestern folks like to add barbecue sauce, so they have a homemade version of that, too.

They were allowed to have help, so Rich’s wife, Peggy, and Bruce’s wife, Brenda, were there to help make sure the competition went smoothly. In 2012, Smokin Bros BBQ won first place in the ribs category. In 2011, their chili won the People’s Choice Award.