The Met: Live in HD begins

The Met: Live in HD season begins on Oct. 5. 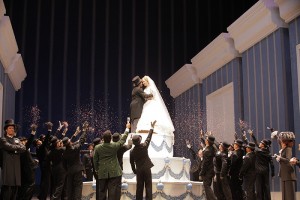 A scene from Act II of “La Cenerentola” by Ken Howard.

Again this year, Meet the Met will gather at Prairie Wind Coffee at 12:15 p.m. the Friday prior for discussion of each opera. New this year will be a shorter version of Meet the Met on the day of each opera beginning at 11:30 a.m. in the green room at the Marion Ross Performing Arts Center for those who are unable to attend the Friday group.

There is no dress code for the opera. General admission tickets are $20 for adults, $12 for students up to age 30. Also being offered is a five-opera flex ticket for $90, which allows ticket holders to attend five operas or attend one and bring five friends, or any similar combination. General adult tickets may be purchased through Act Community Theatre online. The flex ticket is only available at the box office. The box office is open from 4 to 6 p.m. on Thursdays and one hour prior to the opera.

The Met: Live in HD is made possible by a grant from its founding sponors, the Neubauer Family Foundation. Global corporate sponsorship is provided by Bloomberg.