The dream of cousins Ernie Benesh, Emil Prantner and Milo Belshan was to erect a veteran’s memorial for the more than 45 veterans buried at the Bohemian National Cemetery north of the Brick Hall in rural Hayward Township.

According to a press release, the Glenville area Women of Today have helped that dream come true with the creation of a special account for the memorial at Citizens State Bank in Glenville and by raising funds. 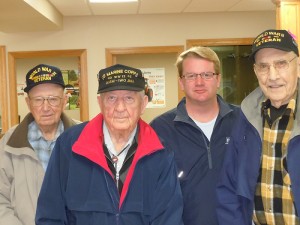 Many fundraising efforts have been done including a sloppy joe, a pancake breakfast and a kolache bake sale.

In February the Glenville area Women of Today applied for a National Society Daughters of the American Revolution special projects grant. The funding from the program is awarded to support projects in local communities that promote the organization’s mission, areas of historic preservation, education and patriotism.

In June funding for the project was made possible through the sponsorship of Anthony Wayne Chapter, National Society Daughters of the American Revolution in Mankato. The chapter’s funds were matched by the special projects grant donation of $10,000.

So far, the black granite monument and base and two concrete life-size concrete soldiers have been received and flags and flagpoles have been ordered. Star Granite in Albert Lea has begun work on a template for engraving the veteran’s names, military branch and war service into the granite.