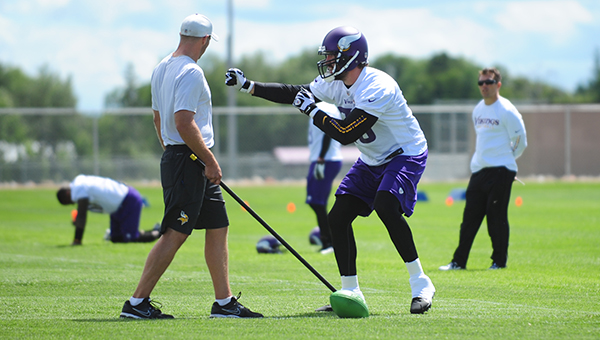 Jared Allen performs a drill during the first day of the Minnesota Vikings training camp at Minnesota State University in Mankato. Allen is one of multiple veterans on Minnesota’s defensive line who will be rotated on and off the field according to defensive coordinator Alan Williams. — Micah Bader/Albert Lea Tribune

Minn. plans to use a rotation on the defensive line to keep players fresh

MANKATO — When Minnesota’s veteran defensive linemen are pulled from a game for a play or two to rest, the coaches are well-prepared for the response.

The summons to the sideline has often been greeted like a root canal. Or a debt collector. Or a week in seventh-grade detention.

So with the starters one year older and the Vikings even deeper at a position group already one of the team’s strongest, well, these gripes are bound to grow louder.

Jared Allen, the NFL’s sack leader since he entered the league in 2004, has never been hesitant to voice his opposition to coming out of the game. Brian Robison has never been a fan of it, either. Part of what’s required for effective pass rushing, of course, is a let-me-do-this attitude.

Backup Everson Griffen, who can play both end spots, is coming off a breakout season. He’s 25. Allen is 30, and Robison is 30. No matter how many tackles for loss the starters rack up, those ages are just as important of numbers in this playing time equation.

“They are all fierce competitors, and they are all incredibly tough guys,” defensive line coach Brendan Daly said. “They’re in great physical condition, and they have a little bit of a sense of invincibility for lack of a better term, that they can go all day every day.”

Backup nose tackle Fred Evans has been challenging Letroy Guion. Stalwart under tackle Kevin Williams will turn 33 next week, and the Vikings drafted his replacement, Sharrif Floyd, in the first round. So the job share is as inevitable there as anywhere. The Vikings have said they’d prefer Williams to take only 30 to 40 snaps per game, which could only be half of a given contest. Last season, Williams often played about 70 percent of the downs.

“If we can get what we are expecting from Shariff … we should get more quality from him over time,” coach Leslie Frazier said.

The other issue here is contracts: Williams, Allen and Robison are all playing on expiring deals. So is Griffen, but his age and ascending production have put him in prime territory for an extension. Floyd, of course, will be around for a while. If the incumbents aren’t new contracts, well, the Vikings better have ready-made replacements for 2014.

“The more pass rushers you can get, the more you want. You never want to turn down pass rushers. You need them,” Frazier said.

Allen has long been the most vocal about his disinterest in coming off the field, and he has won many arguments with his bosses. Last year, for instance, with the Vikings making a surprise push for a playoff spot, he played 72 of 78 snaps (92 percent) against Chicago on Dec. 9 after taking 80 of 82 snaps (98 percent) at Green Bay the week before.

“If you’re good enough to be the starter, you’re the starter. And I’ve always been a firm believer in that,” Allen said.

He has acknowledged his respect of the rotation strategy, but only to a point.

His resistance to relief is rooting in a belief in the importance of rhythm. Allen needs to develop a feel for the way his teammates are rushing around him during a game, and he’s also intent on breaking whatever flow his opponent has going.

“That guy across from you, you know he’s not in as good of shape as you are so you know you have a chance, and that’s when things can spark and things can happen,” Allen said. “You never know when that one play is going to be. I always feel I give our team a chance when I have an opportunity to make that play.”

As evidenced by his 12 sacks last season and 22 the year before.

“You want guys to want to be on the field. You don’t want them over there saying, ‘OK, I’m fine, you go in this time,”’ Frazier said, adding: “It’s a good problem to have, especially when you’ve got guys who are as good of players as ours are.”