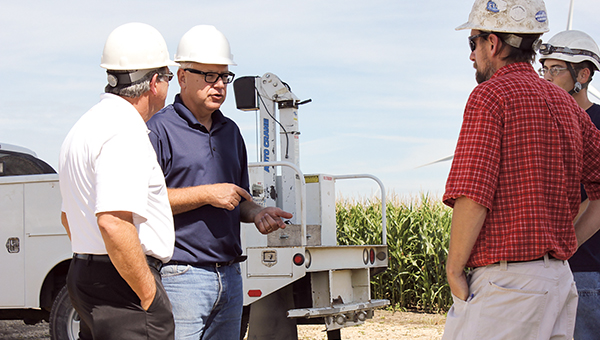 Walz, DFL-Mankato, no stranger to clean energy, was well-versed about the issues as he asked Mike Barrios and wind technicians at NextEra Wind Facility what needs to improve. Barrios — general manager of Midwest Wind, which encompasses NextEra and 13 other wind farms in the Midwest — spoke with Walz about the longevity of parts, the importance of tax credits, incentives and new technology. Like anything else, the wind energy industry is maturing, and better, more expensive parts will mean better efficiency. But it’s not that simple. 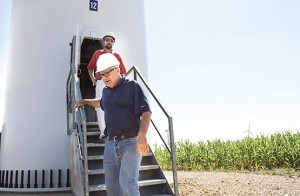 Walz was concerned about efficiency, as wind farms bleed off a lot of unused energy. Walz hopes someone will develop large-scale batteries to better harness that energy for storage and long-term use. That potential technology could foster an economic boom of its own.

“I’ve said whoever owns that owns the future,” Walz said.

Walz also repeatedly addressed the issue of clean energy versus foreign oil. If incentives don’t go toward clean energy, he said, it could be tough for wind farms to expand or even start up. And oil traders could continue to benefit further.

“If you’re not going to produce this energy, someone else will,” Walz said. “It’s got to come from somewhere.”

Such credits, he added, area not handouts and aim to create fairness. Walz further spoke about easing the reliance on Middle Eastern oil and producing more local energy and jobs, especially for veterans.

“In the long run, we’re going to save money,” he said.

After a presentation, the group climbed into a wind tower and discussed current capacity and energy efficiency.

“I think it’s just amazing, the efficiency,” Walz said, still surprised the structures can be built in just two days. “And then you see the footprint we are standing on. We’ve got wind, we’ve got fertile soils.”

For Barrios, who has had several legislators tour facilities in the Midwest, the visit was important, as always.

“It helps us educate him on what wind is all about,” Barrios said. “It makes us more a part of the community. I see it as a win-win for both sides.”

Barrios said it’s good for legislators like Walz to see how wind turbines have such a small footprint.

“It helps him understand, it really isn’t that invasive to the farmers,” he said.

Walz, a member of the U.S. House’s Agriculture Subcommittee on Conservation, Energy and Forestry, is also co-chair of the bipartisan Congressional Veterans’ Jobs Caucus. Trying to foster support and more legislation for veterans’ training and jobs, he showed NextEra his support for their efforts in that area, too.

Standing in the shadow of a 260-foot tower, Walz handed Barrios a certificate of appreciation for hiring veterans. NextEra employs about 93 veterans, and Walz hopes legislation can continue to increase incentives for employers like NextEra to hire that demographic.

Walz is already facing challengers for his seat in the next election. Earlier this week, Republican Aaron Miller of Rochest filed and visited Austin and Albert Lea on Wednesday. Also seeking the republican endorsement are Mike Benson, a state representative from Rochester; Jim Hagedorn of Blue Earth, the son of son of former Congressman Tom Hagedorn; Quist, a St. Peter farmer and professor, and Randy Demmer, a Hayfield farmer and business owner.