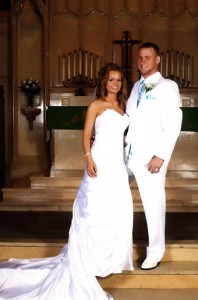 The bride’s parents are Randy and Carla Leegaard of Emmons. Grandparents are Rosie Leegaard, of Silver Lake, Iowa, and Marlene Leegaard of Loveland, Colo., and the late Dale Leegaard and Ken and Arlene Petersen.

Ushers were Earl and Elgen Heskett, uncles of the groom, Dr. John Leegaard, uncle of the bride, and Jared Oppelt, friend of the couple. Personal attendant was Damaris Ponce, friend of the bride. Host and hostess were Andrew Everson and Carina Fitzlaff.

The bride attended Lake Mills High School and graduated from Riverland Community College in 2010 with an associate’s degree in nursing. She is employed at the Lake Mills Care Center as a registered nurse.

The groom is a 2005 graduate of Albert Lea High School. He is employed at Rihm Kenworth as a parts specialist.

After a trip to Riviera, Mexico, the couple will reside in Albert Lea.