Kelsey McGowan and Derek Kvenvold were married at 4 p.m. May 25 at the New Ulm Country Club in New Ulm. The Rev. EvaLyn Carlson, of Grand Marais, performed the double-ring ceremony. 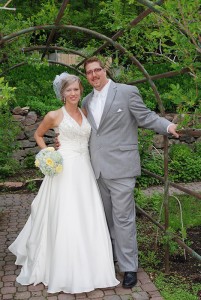 A reception, dinner and dance followed the ceremony at the New Ulm Country Club.

The bride is a 2006 graduate of Perpich Center for the Arts High School in Golden Valley. She is a 2011 graduate of Minnesota State University, Mankato, with a bachelor’s degree in dance. She is the owner and instructor of Northern Lights Dance Studio in Thief River Falls.

The groom is a 2006 graduate of Albert Lea High School. He is a 2011 graduate of Minnesota State University, Mankato, with a bachelor’s degree in automotive engineering and manufacturing engineering. He is employed as an engine design engineer for Arctic Cat Inc. in Thief River Falls.

After a honeymoon to Mary Lake in Brainerd, the couple will reside in Thief River Falls.