Katie Sorenson and Joshua Cords of Albert Lea were married at 2:30 p.m. June 1, 2013, at United Methodist Church in Albert Lea. 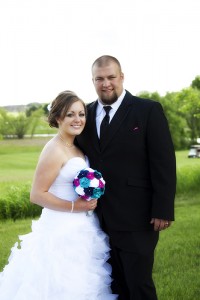 The groom’s parents are Jim and Brenda Cords of Alden. Grandparents are Bill and Lorraine Goette of Albert Lea and Bonnie Cords of Mankato.

Flower girl was Kylin Cords, of Wells, daughter of Andy and Amber Cords and niece of the couple.

Ring bearer was Christian Cords, of Albert Lea, son of the couple.

Reader was Derek Sorenson, cousin of the bride.

A reception was held at Wedgewood Cove Golf Club following the ceremony.

The couple honeymooned at Gunflint Lodge Resort in Grand Marais.