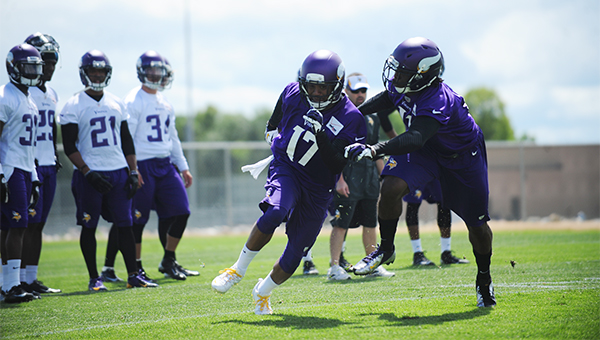 Jarius Wright, left, a second-year receiver out of Arkansas, beats Stephen Burton off the line in a drill during the Minnesota Vikings training camp at Minnesota State University. — Micah Bader/Albert Lea Tribune

MANKATO — Jarius Wright has played in all of seven games and has just 22 catches in his young career.

He enters his second season as a 23-year-old former fourth-round draft pick with one start under his belt. On the young and revamped Minnesota Vikings receiver corps, that practically qualifies him as a grizzled veteran and he’s acting like one.

“The bottom line with Jarius is he knows what to do all of the time,” offensive coordinator Bill Musgrave said. “He can help the other guys in that room. With all of the new faces in the receiving room, he helps them in the meeting room, during the drills and also of course when they break the huddle.”

Of the 12 receivers on the roster in training camp, nine of them are new to the team this year. They added Greg Jennings from Green Bay to serve as the veteran mentor and leader of the group, with his accomplishments with the Packers and go-getting demeanor making him ideal to serve as Christian Ponder’s top target.

Jennings has been as advertised early in camp, helping the young guys with nuances of the game while catching everything that’s thrown in his zip code.

Wright has been more of a surprise. He was slowed early in his rookie season by injury, and quickly found himself buried on the depth chart. His first catch didn’t come until Week 10 after star receiver Percy Harvin was injured the previous week against Seattle.

The 5-foot-10 Wright initially was pigeon-holed as a slot receiver, but has shown an ability to get down the field on the perimeter. He had three catches for 65 yards and a touchdown in Week 10 and finished the season with 22 catches for 310 yards and two scores in the final seven games.

“His maturity for his age and also his experience in the NFL, and we saw this year ago, he’s a very knowledgeable guy, very conscious guy,” coach Leslie Frazier said. “And for him to step in and play as well as he did in this first start action after being, not a guy who was even dressing, that tells you something about the pro that he is and even as a rookie. To see him now kind of take a leadership role that’s pretty impressive.”

Wright says it’s a natural role for him that started in high school and was honed in college at Arkansas, where he played multiple positions for the Razorbacks.

“At Arkansas they made us learn everything,” Wright said. “I’ve always been the type of guy that if you need me to play any position, I’m that guy. So I always made sure that I knew every position on the field. I just tried to carry it over until now. Just studying the playbook and watching film.”

He’s not the biggest guy on the field, so he has learned to study tendencies of his opponent to exploit weaknesses in their schemes rather than jumping over a defensive back to be effective.

“On top of the studying we do at the facility, I go home and you can always get a little extra studying in,” Wright said. “Even if it’s just 30 minutes, doing something every night will help us that much more.”

If Wright can parlay that understanding of the game into big plays on the field, it could change the face of the Vikings offense. They traded the disgruntled Harvin to Seattle before the draft, taking the most dynamic playmaker in the receiver corps away from a passing offense that desperately needs the help.

No one expects Wright to fill Harvin’s production on his own, but showing that he is capable of being a threat could help take the opposing defense’s eye off of Adrian Peterson, Jennings and tight end Kyle Rudolph on occasion.

“He has tremendous instincts,” Musgrave said. “He is a professional, he is studying his stuff. He is just a man’s man. You can count on him every single day and we are lucky to have him.”

Ponder knows he needs all the help he can get in what could be a make-or-break season for him as the team’s quarterback. So far, he likes what he sees from Wright in training camp.

NOTES: The Vikings open the preseason at home against the Houston Texans on Friday night. Coach Leslie Frazier said DE Jared Allen (ankle), CB Xavier Rhodes (hamstring) and LB Desmond Bishop (hamstring) are unlikely to play. Peterson also will likely get the night off as the Vikings look to keep him fresh for the regular season.