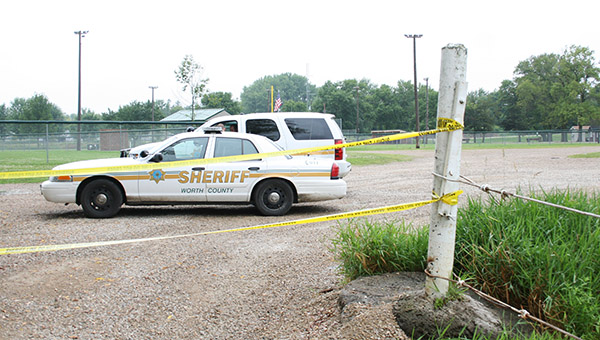 Police tape marks off one of the entrances to Swensrud Park Monday afternoon as two Worth County Sheriff’s Office deputies talk near their cars. –Sarah Stultz/Albert Lea Tribune

NORTHWOOD — Authorities have released the name of a woman who was reportedly stabbed and killed Monday morning in Northwood’s Swensrud Park.

Justina Marie Smith, 30, of Northwood died from multiple sharp-force injuries, according to the results of an autopsy on Tuesday.

Police have arrested Tyrone Washington Jr., 39, of Mason City, after a vehicle chase near Davenport, Iowa. He has been charged with first-degree murder, a Class A felony, and is being held in the Scott County jail on a $500,000 cash-only bond.

Smith and Washington reportedly knew each other before the incident, said Mike Krapfl, spokesman with the Iowa Division of Criminal Investigations, but authorities are still trying to establish the relationship between the two.

The Worth County Sheriff’s Office received a 911 call requesting help at 11:41 a.m. Monday from Smith, according to a news release. When deputies responded, they found the woman with severe injuries and she stated that Washington allegedly had fled the scene and taken her car, a silver 2003 Pontiac Grand Prix.

Krapfl said authorities are trying to determine how Smith and Washington arrived at the park and if they came separately or together.

The release stated Smith was transported to Mercy Hospital North Iowa by the Mason City Fire Department but later died from her injuries.

At about 3:30 p.m., an Iowa state trooper spotted the Pontiac eastbound on Interstate 80 near the 276 mile marker in Cedar County. The trooper reportedly attempted to stop the car, and a pursuit began, the release states.

Washington reportedly left the roadway near the 289 mile marker in Scott County and drove through corn and bean fields along the interstate.

During the pursuit, troopers employed intentional vehicle contact, resulting in damage to the Pontiac and the State Patrol cars.

Washington was arrested without injury.

The agencies involved in the pursuit and his arrest were the Iowa State Patrol, the Department of Transportation Motor Vehicle Enforcement, the Scott County Sheriff’s Office, the Walcott Police Department and the Iowa Division of Criminal Investigation.

Worth County District Court online records indicate Washington was charged with domestic abuse assault and interference with official acts on July 6. He also was charged with violating a no-contact order as recently as Aug. 1, but that charge was dismissed.