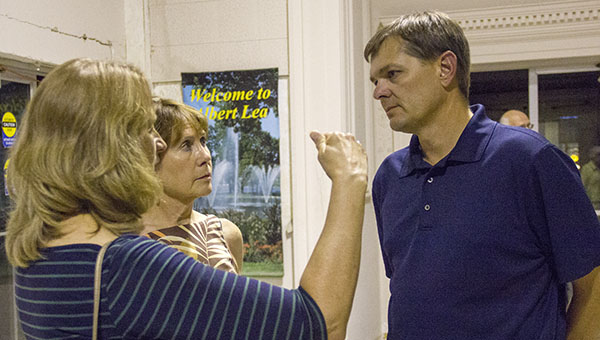 Albert Leans voiced strong support Tuesday for investing up to an additional $1 million into getting the Freeborn National Bank and Jacobson Apartments building ready for a potential developer.

The funds could come through tax incentives, cash, matching grants and possible loans. 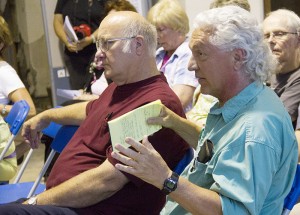 Rick Mammel speaks Tuesday during a meeting to generate ideas for the Freeborn National Bank building.

The consensus, reached at a public meeting at the Freeborn National Bank building attended by about 50 people, came after talking about possible uses for the building and the money necessary to get the city-owned buildings remodeled and in the hands of a new owner. 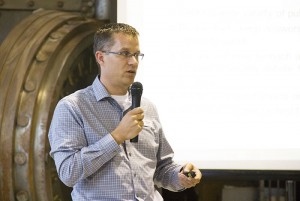 The city has put more than $2 million into renovating the exterior of the building in hopes that it would attract a developer, but the buildings remain for sale, said City Manager Chad Adams. He noted that the funding gap between the city and its last developer interested in the building was $1 million.

The buildings, at the corner of Broadway and William Street, were originally constructed in the 1920s but have been vacant for at least 15 years, other than the opening of Prairie Wind Coffee in the front two-thirds of the Jacobson building last year.

Adams presented a series of questions to the crowd such as what they would like as a destination attraction downtown if there was a limitless budget, what would be the most practical use of the building and if they think there is enough parking downtown.

He went through at least a dozen possible uses of the buildings and asked people to raise their hands if they supported each: 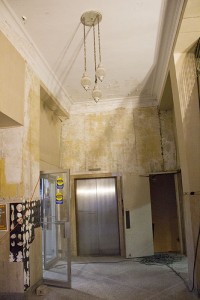 The lobby between the Freeborn National Bank and Jacobson Apartments building has paint that is peeling and an inoperable elevator.

• Community space for banquets and events

Strong support came in for having a restaurant, a community space, an art display or cultural center, some form of housing in the upper floors or a hotel. There was discussion about whether to have affordable, market rate or upscale condos.

Former Mayor Randy Erdman said to have success in the downtown, there needs to be people living there.

“To spur that, we need to have living space that is affordable and nice,” Erdman said.

He noted that 4,000 people come to work every day within the six-block radius of downtown.

There was almost no support for tearing down the building and just a few hands of support came in for moving the Albert Lea Public Library to the building.

“There are a lot of things I didn’t even think about,” said Marty Shepard with the Albert Lea Art Center.

The Art Center has presented a proposal for redeveloping the first level of the bank building and turning it into a new home for the nonprofit organization and as a space for community events, performances and receptions.

“I still support the Art Center,” Shepard said. “I think we fit into the plan.”

She estimated about 15 Art Center members were in attendance.

Adams said ultimately it is the city’s goal to discontinue ownership of the building. Officials hopes to distribute what’s called “request for proposals” or “request for qualifications” this fall to developers. These are documents the government uses to begin contracts with private enterprises.

Prior to the Tuesday night meeting with members of the public, city officials sponsored seven other focus groups seeking input. The results of those focus groups have not been released.

Resident Carol Kepple Thompson said she thought the meeting was well-run and informative.

She supported putting additional funding in the building. She noted that though change is sometimes difficult to implement in Albert Lea, she thinks people would ultimately support that funding toward the building.

“Once the community sees that the downtown streetscape is a success, it will build inch by inch to get people to believe this